The Hannah's came to Alberta from Ontario in 1906 and homesteaded at Angle Lake, eleven miles south of Elk Point. Anson Hannah's father and two brothers had come out to Alberta the previous year and homesteaded in the Angle Lake area. Three of Anson Hannah's seven children were born in Ontario, Ethel, Elgin, and Roy. Bruce was the first born in a log shack with a sod roof which his father had built on the homestead. He was followed by Alice, Earl and Ralph. 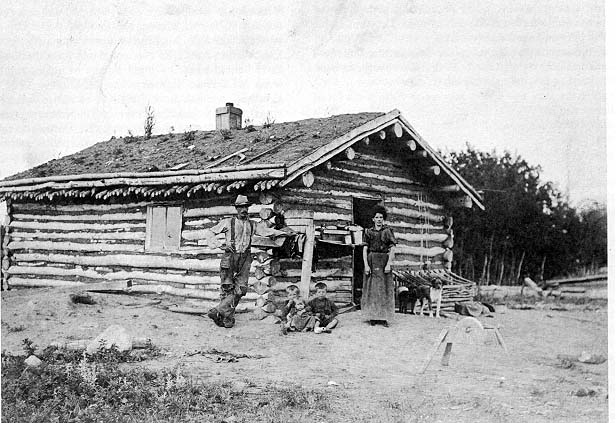 The Hannah homestead with Mr. and Mrs. Anson Hannah, 1907.

Bruce's father worked on the railroad going through Wainwright, and his mother and the little ones stayed on the homestead and often talked of the loneliness she endured those first years.

Times were pretty hard and until they could get some land broke, using oxen which was a very slow process, Mr. Hannah worked out to feed his family. He told many tales of the early days and of walking to Angle Lake from Fabian the day before Christmas to be with his family.

When they came from Ontario bringing all their belongings, he told of bringing a beautiful top buggy which was a teal luxury and of little use to them as they had only the oxen. He traded that buggy for a double-barrelled shot gun which Bruce still has and which was used a great deal to get meat for the family. Wild game was plentiful.

After a few years they got land cleared and broke, obtained some cattle and horses, and Bruce's father carried the mail from Angle Lake to Northern Valley and Pete Post Office.

They also kept stoppers and many nights their log shack was filled with over-night guests who stopped to feed and rest their teams on the way from Elk Point to Vermilion.

In 1918 the family moved six miles north of Vermilion and stayed there five years, still keeping stoppers and farming. In 1919, the year of the flu and also one of the longest, hardest winters in history, they lost their youngest son. Bruce tells of the whole family being in bed ill and he, only nine years old at the time, with the help of his uncle, Truman Scott, managed to feed the cattle and cut wood for the stoves.

Dr. Miller, who was on his way to Vermilion and always stopped to feed and water his team, was concerned when he saw no movement around the house, came in and found them all ill indeed. He brought medicine from Vermilion for them and instructed them how to care for themselves.

The two eldest boys returned East on a cattle train and got work on the Welland Ship Canal on the Great Lakes and stayed there. Mr. Hannah, who had been a lumberjack in Ontario, got the urge to go back to that type of work so in 1923 they all moved to Prince George, B.C. Bruce was now thirteen years old and went to work with his father in the logging camps to help support his mother and two younger children. They moved back to Landonville in 1928 and Bruce bought land there. He and his father homesteaded north of Elk Point in 1929, Bruce on S.E. Â½-31-57-6-4 and his father on S.W. Â½-32-57-6-4. They never really expected to live there but intended to take out lumber to put buildings on the land Bruce had bought. They farmed there for a couple years, raising lovely crops but in 1931 when the depression came, prices of grain went so low Bruce could plainly see the move to the homestead was the only answer. They built a log shack and barn and moved that winter.

Bruce and his father logged in the area and hauled wood to town for $1.50 a sleigh load. At that time everyone heated with wood so he could always sell it.

Clearing the land was a slow process as there was a lot of very heavy timber. An axe and team of horses were the tools and he and his father spent many long days for a few acres in the bush.

Bruce hauled many loads of feed for thirty miles and more in 50 and 60 below weather to feed the cattle as they could not raise enough on the few acres they had broke.

Although everyone worked hard there was always time for recreation. Winter evenings they went to the neighbors to play cards or someone would have a dance in their own home. In 1936 all the neighbors decided they should build a community hall and with the help of the Reid family, Millers, Teeters, Hannahs, Bob Brown, Tumeys, Shorty Stow, and others, a hall was built on the shore of Long Lake. There was any number of violin players in the district and Walt Holley's house was a favorite meeting place to dance. Walt was a bachelor and enjoyed dancing as well as anyone so was always willing to let everyone use his house.

It was at one of these parties that Bruce and I met, and in 1934 we were married. We had wonderful times together. Summer time on Sundays all the neighbors met at Long Lake. We had a local ball team and everyone took part in the games held there. All the women would bring picnic lunches. Shorty Stow, who had a few boats, usually supplied the fish, and Mr. Reed, Mrs. Hannah Sr., Mrs. Turney, Mr. Teeter, and myself, would fry fish for everyone who came and spent many enjoyable summer Sundays this way.

Bruce and I farmed on the homestead, later acquiring his father's homestead and three other quarters adjoining and continued to farm until 1973 when we sold the farm and moved into Elk Point to retire