My earliest recollection of Elk Point was early spring of 1916. It was dark and raining and mud and water was four to twelve inches deep in the street. Grandmother Edwards, Icia, my aunt (later to become Mrs. Buckley and then Mrs. Tony Spence), my sisters Lucille and Thelma, and myself walked a plank by lantern light across the ditch from the road to the old Caskey Hotel. The hotel looked very cozy that night. My Dad, Barney Edwards, Grandfather Joe, and Emmett, better known as "Coon Edwards" put the horses away before they came in.

The next morning was sunny and we continued east to what was then the Mooswa district. Dad rented the Sweheim homestead where Vincent Lawrence now lives. He later bought from Pete Hanson the N.E. quarter of the section the Canadian Salt Co. is located on.

My folks traded in Elk Point but being a kid and kids didn't go to town much in those days, I don't know much about it. I remember Dad helping move a building into Elk Point from the homestead for C.A. Johnson. I believe this was his original pool hall and confectionery. There was Markstad's General Store and Babcock's Groceries etc. I also remember Charlie Hood's Hardware.

I really became acquainted with the Elk Point area when I went to work on railroad construction in 1926. We used to go to town Saturday nights to eat ice cream, drink pop and tease the girls and there were some mighty nice ones too. We would tin can dogs for excitement and let me tell you we had some bang up Saturday nights. Halloween was a whizzer that year. We had a local store keeper, the sheriff, and several farm boys in one bunch and come morning there wasn't an upright out-house in town. In fact some owners couldn't even find their own. Through the years we took in dances and house parties in and around Elk Point. They also had several sports days. In general we watched the steady growth of the town and community.

The Edwards family all left during the depression years to scatter from Alberta to British Columbia and destinations in the United States.My wife Dorothy (Lorenson) and I have retired in Demming, New Mexico. 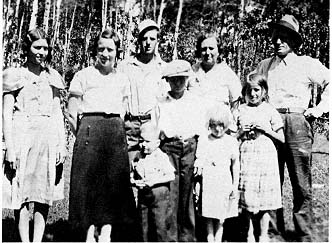 Brother Jim is in Seattle with his wife Elsie. Ross and Irene are living in Prince George. My four sisters are Thelma, Ruby, Wanedia and Nina. Thelma married Bernard Lloyd and they have lived and retired in Ponoka. Ruby is Mrs. Milton Swanson, and with her husband, lives in Coquitlam, B.C. Wanedia married Doug Robertson and lives in Illinois. Nina and her husband John Cavers make their home in Vancouver, B.C.

My mother and sister passed away some years ago and are buried in the Mooswa Cemetery at Lindbergh. Dad, known to many as Captain B.C. Edwards, the Auctioneer, re-married years later to Mrs. Hall and he and his wife made their home at the coast. (B.C.)

In the summer months Dorothy and I like to go back to the Elk Point area to fish and play and enjoy visiting with the old timers. There are not many left.