Michael Capjak was born in Czechoslovakia in 1874. He immigrated to the U.S.A. and lived in New York for two years. There he met and married Ilana Medivesky. She had emigrated from Czechoslovakia when she was fourteen years old. She was married at the age of sixteen.

Soon after they were married, Mr. and Mrs. Capjak travelled by train to Bellevue, Alberta, to get a job working in the coal mines. He worked as a miner for several years. While Mike was working in the mines, there was an explosion in which sixty men were killed. This deterred Mr. Capjak from going back to work in the mines and so, therefore, he decided to go looking for a homestead. Mr. Capjak took a train to Vermilion to find what homesteads were available. He filed claim on his homestead around 1909. From Vermilion, he walked forty miles to his homestead which was the NW 10-56-6-W4 in Northern Valley. His first neighbor was Charlie Larson.

Mr. Capjak built a one room log house. The roof was sod and the floor was wood. The outside of the house was plastered with mud. Mud plaster was made by digging a hole and in it mixing clay, water and straw. This was mixed with the bare feet until it was smooth and then was applied to the structure. 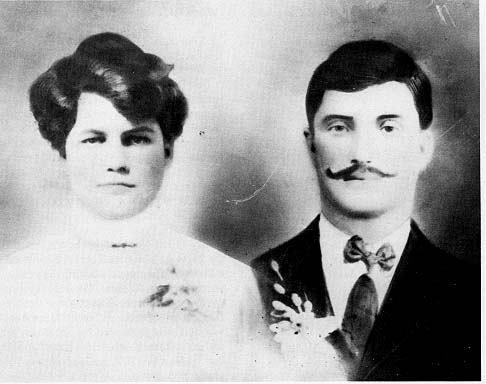 Ellona and Michael Capjack on their wedding day.

After the house was built, Mr. Capjak went back to Bellevue to pick up his wife and their three children (Joe, Mary & Ann) and their belongings. He made arrangements with Charlie Larson to pick them up at Vermilion. They travelled by oxen and wagon to the homestead.

The homestead was very dense with poplar and willow. Mr. & Mrs. Capjak cleared the land by hand by themselves. From the logs they built a barn and a chicken house. A well was also dug. Mr. Capjak purchased a team of oxen and a walking plow. Enough land was cleared to plant wheat, rye and oats and for a small garden. The grains were sieved by hand. The grain was cut by hand with a sickle or scythe, tied into bundles and then stooked in the field. When dry, open bundles were spread on canvas and were threshed with a flail. The straw was picked out by hand or a fork. Then wooden shovels were used to toss the grain into the air to blow away the chaff. Crop yield was fifteen to twenty bags. Wheat was primarily grown to provide flour for personal use and the straw was used as fill for mattresses.

A few years later Mr. Capjak managed to buy two horses and some machinery. He continued to clear more land and own more land. Year after year there were more and more pioneers coming into the area. They all shared and helped each other.

Vermilion was the center for marketing, selling and purchasing of supplies. Wheat sold for $5.00 for a 120 pound bag. Wages were fifteen cents an hour and $.50 to $1.50a day.

Mrs. Capjak gave birth at home with the aid of a midwife. All six succeeding children (Mike, Katie, Rose, Louie, George and Johnny) were born at home.

In 1918, the entire family became ill in the flu epidemic. One of the neighbors (Fabian Uchman) walked two miles every day to take care of the family and to do the chores. Mr. Uchman also had his own family to take care of and his own chores to do. No one in the family died from the flu.

In 1917 a one room wooden school house was built. It was called Willow Range School. Mr. Capjak was trustee of the school and he was also an appointee for the L.I.D. of Vermilion beginning in 1912.

School classes were held during the summer months only. Grades one to eight were taught. All children walked to school. Some walked as fars as four miles to get to school. Arithmetic, science, geography, spelling, writing and grammar were taught. There were between fifteen and twenty pupils in the classroom. Children were seated in double desks. Boys were seated with boys and girls with girls. The grade ones were seated at the front and other grades were graduated to the back of the classroom. A forty-five gallon drum made into a wood stove was used to keep the room warm. Discipline was very stern. A correction strap (2" by 2ft.) was made of solid rawhide was used as a form of punishment. Children learned their lessons on slates, which were provided by the students. Children learned to read from a primary book. The first page was a coloured picture of Helen holding an apple. The sentence under the picture was "Helen had the apple." On another page, "Jack Spraat had a cat." Jack sat on one side and the cat sat on the other. Games were played at recess and during the noon hour. Games played were pomp-pomp-pull-away, hide-and-seek, and farmer in the dell. There was a yearly Christmas concert in the school. Santa Claus was there too. He would give a child a Christmas bag which contained peanuts and candy. All people who attended the concert were given an apple. After the conceret there was a dance.

Often the neighbors would get together and tell ghost stories about Sheba and the exorcist. These stories would so frighten the children that they would be scared to go outside.

Mr. Capjak read the Czechoslovakian paper and books. Mrs. Capjak would read the Bible every Sunday to the family. The Bible was very special to Mrs. Capjak. It held the birth records of all the children.

Church services were held in peoples' houses about twice a year. It did not make any difference what religion they were, as long as they had the common language. This was the time when the travelling priest who came from Mundare baptized the small children.

Starting in the 1930's, a church picnic was held once a year on July 7th. Activities such as softball, games, races, pole climbing, high & broad jumps, two legged races and tug-of-war were held. Prizes ranged from 25 to 50 cents.

In 1921 Mr. Capjak built another log house. It was two stories high. The roof had shingles and the siding was partially finished with cedar.

In 1923 Mr. Capjak had his leg amputated and died soon after. Mrs. Capjak was left alone with nine children. The two oldest children, Joe aged fifteen and Mary aged thirteen, helped their mother to put in and take off the crop. As soon as the children were old enough to help, everyone pitched in to help mother with the farm.

When the depression came, life was a struggle on the farm. Grain sold for 18 cents a bushel, cattle $8.00 a head and pigs $3.00 a head. Only the school age children had one pair of shoes for the winter months. During the summer months no one wore shoes. The children wore denim overalls and dresses which Mrs. Capjak sewed. She also made soap for washing clothes. When the children had sore throats and high fever, Mrs. Capjak used her own home remedies of capsaline, hot milk with butter, heated bran or oats put around their necks. Wild game and fish were plentiful in those days. The family hunted prairie chickens, partridges and rabbits. Weasels were trapped for furs. Deer weren't hunted. Fish caught were mainly pickerel and jackfish. For recreation, the children had homemade skis made by boiling two wooden boards in a boiler so the wood would soften in order to turn the ends up. They also slid down hills in a four-runner sleigh.

When World War II came, no one in the family was conscripted to enter the armed forces. During World War II food stuffs such as tea, coffee, sugar, meat and liquor were rationed. Each family received a coupon book and the coupons had to be presented to purchase the food stuffs.

Mrs. Capjak died in 1964. She was buried at Northern Valley where her husband was previously buried