In February, 1930, Mr. Keliner wrote to state that the C.N.R. could not be induced to complete the railway until perhaps 1931-4: it must appear in retrospect that the consideration devoted to this construction in 1928 and 1929 was the most favorable that was ever to be accorded. Later efforts were less coordinated and at this stage, in 1977, it is apparent that only a significant transportation emergency could create interest again.

A resolution was passed in December, 1930, which stated in effect that, owing to the severe financial stringency caused by unfair prices for produce, the council decided unanimously to defer the spring tax sale. School districts were reported in difficulty; the secretary was instructed to pay no more to them than had been collected in taxes. The net income of farmers over the entire province was estimated to be less than $400.00 annually.

The secretary offered to accept a cut in salary in 1931 but this voluntary sacrifice would be unfair, according to the council, because his salary was already $600.00 under the average. In 1933 he again offered to accept $800.00 instead of $1000. On this occasion the council agreed, though it would obviously have been with reluctance, for they provided some compromise in the form of a $100.00 payment to compensate for rent, heat and light for the office space he was supplying.

A letter was received in April, stipulating that the railway would not be completed in 1931 due to enforced economies. "Poor relief' provision increased to around $365, indicating a greater prevalence of extreme privation. Applications appeared to have been largely approved at from $5.00 to a very rare $12.00 a month for large families. Widowed Mother's Allowance was reduced from $40.00 to $30.00 a month.

Hay was leased on municipal land at 25 cents a ton.

A cost-sharing grant, federal-provincial-municipal, in the amount of $1000 was spent on roadwork in 1931, employing those ratepayers in need of relief.

Tax Consolidation Agreements were instituted to enable farmers with tax arrears to retain their land. In effect, it was a contract which enabled a farmer to pay arrears in equal payments over a period of four or five years, along with current taxes in each year. It was undoubtedly a tremendous boon and protected many people from the loss of the family farm.

One renter delivered a crop share of oats to the elevator in the amount of 454 bushels and turned in the cheque for the full amount, $40.45.

A U.F.A. Local requested that ratepayers be accorded the opportunity to work out school taxes. The department declared that this request could not be approved.

In 1932 the department announced a further reduction of 10 percent in Widowed Mother's Allowance. The council decided against spending the necessary funds required to send a delegate to the municipal convention in 1932. Grain prices as of November had declined by one-third in the previous two months. The reserve prices on farmland which had gone through Tax Recovery proceedings were obviously placed very high so that no one would consider purchasing any parcels. This allowed owners a further length of time in which to redeem their forfeited land, if it had been listed for Tax Sale.

Also in December, 1932, the government announced a new Relief Plan, under which unemployed men who were placed on farms during the winter months received a payment of $5.00 per month from the government. The men worked for the farmer and received board and lodging and were thus removed from the city streets.

Ladies church groups were sponsoring fall chicken suppers at 25 cents in an effort to raise a few dollars.

At the annual meeting in February, 1933, the electorate recommended that the area be closed to any further homesteaders because no suitable land was still open that would enable a family to make a living.

During 1933, for that year only, ratepayers were permitted to work out the full amount of the current municipal levy.

Councillors reduced their allowance to $3.00 a day, with $4.00 for the reeve. Land sales were effected without a down payment, and occasionally with just an assurance that some improvement in the form of new breaking would take place. Old Age Pension allowances were largely $10.00 a month. In 1934 the rate of pay for the road foreman was reduced to 45 cents an hour and a man and team to 45 cents an hour. A 15-30 tractor and operator earned $2.00 an hour.

It is my impression that it was during the depression that farmers caused the term "Kicked the Bucket" to be origin-ated and to become synonymous with death. The suggestion was that a farmer, in the depths of despair and feeling without any vestige of hope remaining, would make his way to the barn, stand on a tall feed bucket, tie a rope to a beam and to his neck and then literally kick the bucket out from under his own feet. Fortunately, such instances occurred rarely in Alberta and they are not typical of farmers. Traditionally they have never allowed themselves to be bowed by adversity. Actually their special triumph has been to find something humorous in life even when pressures were the most excessive.

This fictitious story illustrates the above point. A farmer brought a load of wheat to the elevator but found that, after dockage and freight charges were calculated, he actually owed 75 cents to the elevator company. The agent was sympathetic and suggested that, if the farmer wished to bring in a turkey, he, the agent, would pay the 75 cents and the farmer would be freed of his indebtedness. This was agreed upon. The next day the farmer appeared, but with two turkeys. The agent reminded him that he needed to bring only one. To that the farmer replied, "Oh, but I brought another load of wheat".

The M.D. of Lincoln did not suffer the drought and grasshoppers of drier parts of the province, but much of the land was not highly productive and the farm income was frightfully low. That the farmers could persist and local government survive is almost miraculous.

In spite of all the adversities, the following is the report submitted to the February, 1934, annual meeting: "all schools have been forwarded the money they needed; all but one has credit balances; some districts are reducing their requisition for 1934. The hospital requisition has been paid in full and taxes have been reduced 1 1/2 mills; the account is $1000 better off than a year ago; all municipal loans have been paid; the tax rate has been reduced 3 mills and all of the 1933 municipal tax levy worked out".

In 1933, the council were far-seeing enough to set aside the N.E. 8-56-4-W4 as a recreation area beside Whitney Lake. In January, 1942, there is reference to a name of Lincoln Park, Whitney Lake; the title was most logical, but I doubt that it has ever been used since.

THE ONLY WAY IS UP

For example, by 1934 a 7 percent discount was granted on all current taxes paid before September, and any payments of arrears in full were accorded the same discount as would have been granted under a Tax Consolidation Agreement. The old Lindbergh School was purchased for $300.00 to become the Municipal Office, along with Lot 7, Block 1, as a subsequent site for the office. Things were looking up. 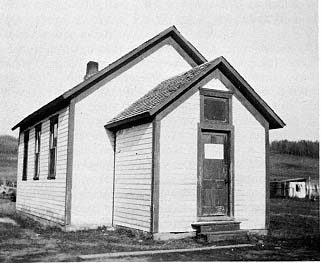 All relief payments were again charged to the recipient. Anyone paying the principal in 1936 on former Seed Grain Advances had the interest cancelled. Lots in the hamlet of Lindbergh increased to $20.00 each. The secretary's wages were again raised to $1000.

In 1936 also the Department of Public Works paid out $450.00 in Prosperity Bonds (scrip) for roadwork. This scrip was issued in denominations of $1.00 (and possibly $5.00). On the backs were little squares to which the person in possession of it on any Thursday placed a stamp which was sold by the Albert cents government. When the certificate had accumulated stamps to the amount of the face value, then it could be turned in for the cash value. This so-called "funny money" had been issued in the amount of $360,000 before the Supreme Court determined that it was really not legal tender.

Oats increased in value to 30 cents a bushel.

The municipal district was progressive enough to encourage farmers to become involved in the forage crop scheme to improve feed supplies and to maintain soil fertility. A Weed Inspector, Mr. J. Salmon, was first appointed in 1937, indicating that noxious weeds were becoming a threat.

In 1938 there was reference to wheat at more than 90 cents a bushel, barley at 60 cents and oats at 40C. The secretary's salary was increased to $1150. In the same year, two weed inspectors were appointed in the persons of Mr. P.C. Hoard and Mr. Thomson. Also in 1938 a notice of intention was received to permit the formation of the village of Elk Point.

Tamarack planks were becoming scarcer, so the council turned to concrete culverts and accordingly the necessary moulds were purchased in 1938. In that year a resolution was passed to support the District Agriculturist Mr. Fontaine in his plan for the establishment of a Restricted Area for Bovine Tuberculosis. A further resolution in 1939 approved the proposal of the Elk Point Board of Trade for a bridge across the North Saskatchewan River.

The 1938 tax dollar was designated as follows:

In March, 1939, there was the first mention of the proposed school division.

In 1940 wheat yield in four townships in Ranges 4 and 5 amounted to only nine and ten bushels to the acre. Presumably because of the war, farmers were under strict delivery quotas and many could not even sell their total production. In 1941 there was a Wheat Acreage Reduction Policy to encourage farmers to seed less acres to grain.

The secretary becoming liable for continuous military service in January, 1942, Mr. A.A. Ham was hired to replace him, effective January 10, 1942