SALE OF PRODUCE IN PIONEER TIMES

Eggs and butter were traded to the stores for groceries. It was the livelihood of many early set4ers. Eggs were packed in chop or oats to keep from breaking while in transport to the store. In the dirty thirties, eggs were sold for as low as 5 cents a dozen and were sometimes hard to sell. Fifty pounds of cream brought about $3. Hogs sold for $3 each, and two year old steers for $7 each.

In 1916-1917, the Alberta government implemented a cow loan under the Livestock Encouragement Act. If your application was accepted you could borrow up to $500 to purchase cattle.

In 1941 the dominion government paid the farmers two dollars an acre to summerfallow their land rather than grow wheat. Alberta farmers were paid ten million, two hundred and sixty thousand dollars, an average payment per farmer of $173.61

Eggs can be preserved and be on hand all winter long. Sailors, using this method have kept eggs for four years at sea. Fill a barrel half full of solution in these proportions; 3 gallons water; 1 pint fresh, slaked lime; 1/2 pint common salt, and immerse eggs. 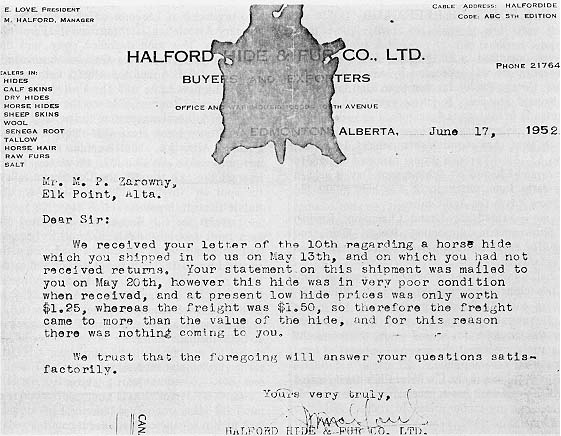 Agriculture did not always pay! 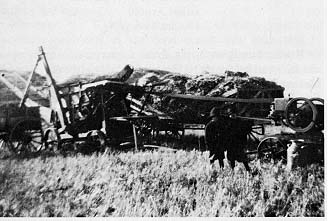 Note the straw auger. Owned by Jack Compton, Inez and Evelyn Carlson in the foreground. 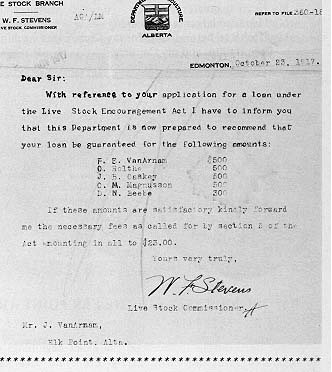