The following article appeared in a September 20,1933 issue of the St. Paul Journal.

'A Monkman, ferryman has had a very busy summer at the ferry where traffic is probably heaviest of any ferry over the Saskatchewan River. As evidence in support of this statement the first Sunday in July saw:

In all, 1073 passengers ferried across and there may have been busier days than that since July.'

A BRIEF RESUME OF FERRY OPERATIONS IN THE AREA

The ferry was installed at Elk Point in 1913 and operated by Charlie Magnusson. Following him was O.M. Jacobson who was ferry man from 1925 to 1930, assisted by George Bartling in 1930. Alf Monkman then ran the ferry until 1937 assisted at various times by I.H. Gilpin, Paul Gusnowski, Bill Keller, D.J. McKay, and Harry Keck, the latter becoming chief operator in 1938. Assisting Harry Keck during the next six years were A. Monkman, F. Scott, F. Vaughan and Patrick Madden. When Paul Gusnowski took over to serve for the year 1945, he was assisted by John Pankow. Mr. William Rutherford worked as ferryman in 1946 and by that time business was so brisk that two assistants were needed: Frank Chuklinske and Henry Beaudette. In 1947 the same circumstances prevailed and operator Gerald Stults was assisted by George Boratynec and Onesim Lakusta. Mr. Lakusta was the ferryman from 1948 until the ferry was taken out of service upon completion of the bridge in 1950. Onesim Lakusta was assisted first by George Boratynec and Paul Gusnowsky, and finally by Alex Gusnowski and John Libich.

The Hopkins ferry was installed in 1907, but records of who operated it start only in 1925 at which time it was A.D. McGinnis who worked in this capacity until P. Martin took over in 1937. Leon Kobel replaced P. Martin in 1942 and he was still on the job in 1969 when ferry service was suspended because of the new bridge. During this thirty-seven year stint, Leon Kobel had two years off --1946 when Nick Zacharuk was operator, and 1949, worked by Carl Nelson. 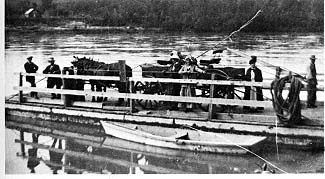 Crossing the ferry 1914. A. Whitworth, his mother, wife, and sister

The Lindbergh ferry was installed in 1911, but again, early records are not available. Among the many who gave faithful service from 1925 until the need was met by the building of the bridge at Heinsburg in 1963 were Henry and Archie Anderson, William Jurak, Neal Edwards, James Madden (nine years), Steve Sawak, Fred Madden, Clifford Stults, Lawrence Sharkey, Gerald Stults, Richard Ingersol, Harry Kalynchuk and Rolf Anderson who did the work for the last nine years that the ferry was in use.

These men were familiar with danger, isolation and long cold hours as night service was provided and a fee charged.

If for some reason the ferry should not be operating, often these skippers would volunteer to navigate a boat across the river with passengers and supplies. Still more daring was the operation of a "jigger" or cable car hitched to the ferry cable during fall freeze-up or spring break-up to transport passengers across and above the river. Modern midways could never devise a ride to surpass an experience such as this. The daring, the desperate, and the brave travelled on it. The Crees called it "Kissiskatchewan Sepie". Many pioneers will be relating in their memoirs, their experiences of these nerve shattering experiences, but this one by Steve Andrishak seems appropriate here: 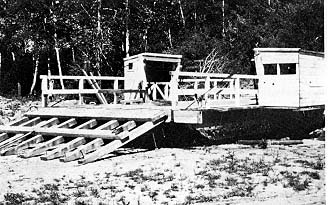 On a warm sunny April aftermoon in 1939 a number of boys, not knowing what to do, decided to go to the river and watch the ice go out. When we got there someone suggested, "Let's go across the river in the cage." I had never been across in the cage before but, after a little coaxing, decided to go along.
About six or seven of us piled in and Harry Keck, in charge of operations, soon had us on our way. About half way across, the pulley wheel started to grind on the cable above the cage. Suddenly, with no warning whatsoever, we were plunging toward the river ice, a drop of twenty feet. The cage landed squarely on the ice. If it had rolled, a number of us surely would have been killed. The heavy wooden pulley apparatus landed on top of the cage and was within inches of shearing our heads off.
Luckily, we landed on the rotted ice, rather than in the cold icy water. The ice was unsafe to walk on and we had to be rescued by boat. One hour later the remains of the cage went down the river a short way. That evening the river was a mass of flowing ice.
Badly bruised and shaken, we luckily survived any serious injuries. However, it was an experience I will always remember.

The cause of the accident, no doubt, was the cage being overloaded. The weight of the passengers pulled the "dead man", or anchor, on the south bank into the river, thus dropping the cage and cables to the ice below.
To best of my memory, the following were passengers on that ill-fated trip: Harry Keck, Sam Soldan, Floyd Cromwell, Jim Hutter, Peter Andrishak, Bob Quin, and myself, Steve Andrishak.

"The North Saskatchewan River just wasn't meant for steam boats. It was frozen over for a good six months of the year. During the break-up the river was a seething rolling mass of icebergs. In the fall the water was so low that even the main channel couldn't float a boat. This unpredictable river shifted its sands and gravel shoals so that the captain was never sure where to find the deep channel. Now, the only boats still in use are ferries where the traffic is light."
(The foregoing is an excerpt from Know Alberta) 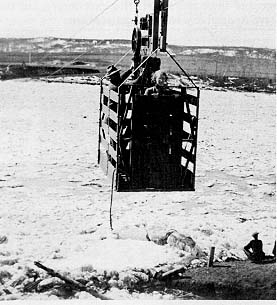 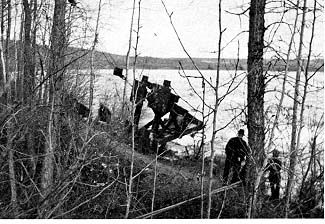 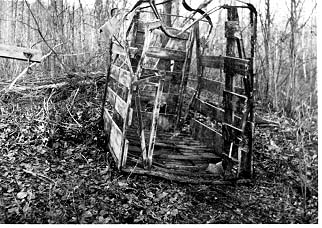 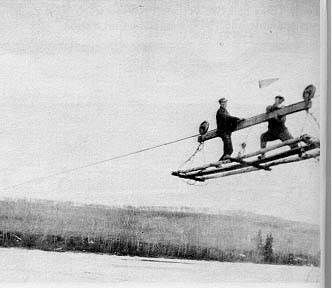 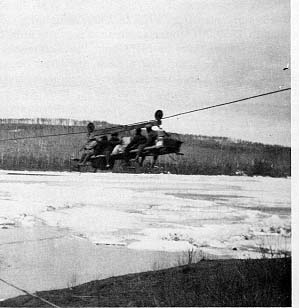 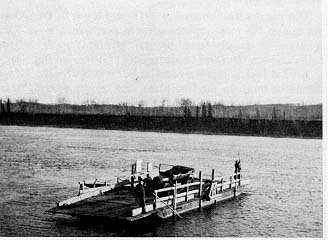 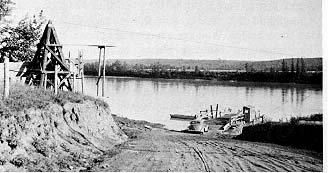 by A. J. Bartling

O. M. Jacobson started operating the Elk Point ferry in mid-summer 1918. He had many helpers or second men. Paul Gusnowski worked there for years. George Bartling worked the summer of 1930 but late September moved to Fairmont, Minnesota. Augie Bartling finished after the ferry was pulled out. 0. M. Jacobson retired from ferry work in 1931.