In 1896, Fathers Albert Lacombe and Joseph Adeodat, both Oblates, founded the Metis Colony of St. Paul-DesMetis. The Metis had first choice of homesteads and a clear title to eighty-acre plots of land. Most, feeling hemmed in by "whites", preferred emigrating to other climes. In 1909, the Metis settlement was thrown open to "white" homesteaders.

He received $500.00 from the Archbishop for that purpose, plus $135.00, to buy a horse and buggy for his travelling. A note written to Father Kennedy MacLean by Archbishop J. O'Leary in October, 1931, reads, "Do your best to establish a church there." And he did.

St. Michael's Catholic Church was built by volunteer labor, both Catholic and non-Catholic, and was completed in 1929. 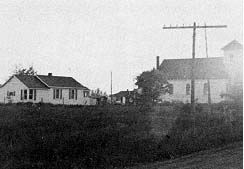 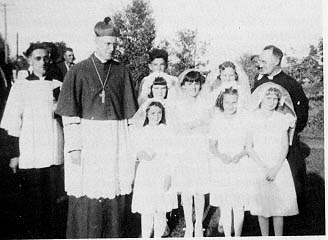 Mr. Joseph Keller built a beautiful altar for the church. Father Fitzgerald, Mr. Keller and Auburn Kepke built pews in Mrs. Keller's kitchen. All planing and sanding was done by hand. The pews were hauled to the church by horses and wagon.

Mr. Keller's daughter, Nellie Kepke, always had a hot dinner for the priests. She tells of cooking Sunday dinner for the Bishop, who was six-foot-four, and her front door was only six feet high. Despite her saying her little log house wasn't quite the right place to entertain a Bishop, everything turned out well and was greatly enjoyed by all.

The purpose of the council is to provide guidance in all forms of Christian education, advise on finance, and organize parish gatherings.