Early records give credit to Mr. F. Bullis for being the moving force in the organization of the first Old Timers' Association. The following is a copy of the minutes of the first meeting:

Mr. O.J. Fish, Chairman Mr. E. Bullis moved that an association be formed and this was seconded by Ed Smith. It was put to the meeting and carried.

Moved by Mr. Fish that we elect the officers.

Moved by Mr. Bullis that A.A. Rain be secretary-treasurer. Seconded by Mrs. Swanson.

Mr. Bullis was asked to get in contact with Mr. J.W.G. Morrison in Vermilion to draw up the Constitution. (Years of residence was set at forty years in the western provinces for members.) This was moved by Mrs. Ramsbottom, seconded by Mrs. Rain.

The following are excerpts taken from the Constitution "Whereas it has been felt by several old timers residing in the postal district of Elk Point that an association should formed for the purpose of getting those men and women together for social purposes as a body and to that end have oi lined a Constitution of which the following are suggest provisions:

Constitution of which the following are suggested provisior The name of the Association shall be the "Elk Point 0ld Timers' Association" and shall have headquarters at F Point, Alberta. 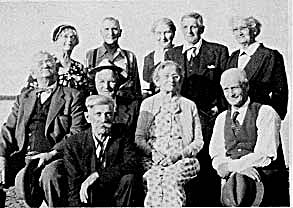 The object of the association is to promote social activities. among the members; to bring the old timers and their families together for social purposes and entertainment, particularly on the occasion of the annual gatherings; discuss impartially all questions affecting interests of community and welfare and enjoyment of members general. The association however shall not take part as a body municipal, provincial or federal affairs, and political discussion shall not be permitted at any of the meetings. 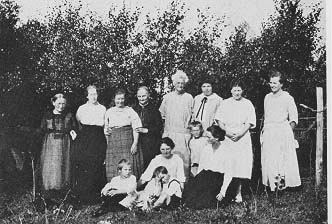 Any person living in the district of Elk Point who resided in the western provinces, west of the Great Lakes, a period of at least forty years may become a member of association upon payment of membership fee of one dollar which is payable on or before date of annual meeting. annual meeting shall be a dinner meeting and dance cal upon a date fixed by the executive and of which ten d notice shall be given the members. The word "person" "member" shall include male or female. At the annual dinner all members or others present shall pay the dinner and dance charges. Exception may be made of guests present on invitation of the Executive."

It was in 1954 that Dr. F.G. Miller suggested that the executive take it upon themselves to attempt to get reports from the various parts of the community so that a local history might be compiled.

The music for the dance after the first banquet and annual meeting was supplied by (Mrs.) Minnie Boos, Mr. C. Boos, Jr. and Mr. August Bartling. Membership at this time consisted of from seventy-four to eighty-four members.

In 1956 the Legion Hall was being used as a school room, which presented the problem of what to do with the school books during the meeting and banquet. Mrs. Flanders suggested shopping bags be supplied to all the children so that books would not be misplaced. Eighty-six attended that banquet.

By 1964 membership had decreased considerably due to deaths and to people moving away. 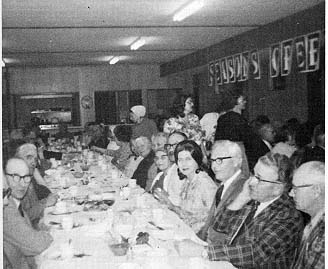