GOING BACK IN TIME

1972-1973 was the first year for the Bucs, Barry Golberg was the coach, Ed Babenek, Dr. Anderson and Allan Buck were managers. Crowds were large then and have continued to be ever since even though the Bucs have made the play-offs only two times in six years.

Bucs first game was at Vermilion December 21, 1972 where they lost 7-5 to the Night Hawks. Their first home game was December 27, 1972 against Vermilion Night Hawks. The Bucs won 3-1 to the pleasure of 500 screaming fans. The first goal was scored by Dr. Anderson assisted by Allan Buck and Babe Sharkey.

The team was nameless for the first few games. Barry Golberg suggested Buckaroos after the old Portland Buckaroo team. It was decided to officially call the team Bucs.

The Bucs first made the play-offs in the 1975-76 season under the coaching of Ed Buck. They lost three straight games to Two Hills in the semi-finals.

The Bucs under coach Allan Buck missed the play-offs in the 1976-1977 season by three points as Lac La Biche beat them out for the fourth and final play-off position.

The 1977-78 version of the Bucs is the most successful team to date. Under the coaching of Babe Sharkey the Bucs won the first place pennant only to lose to Two Hills in three straight games in the semi-finals. 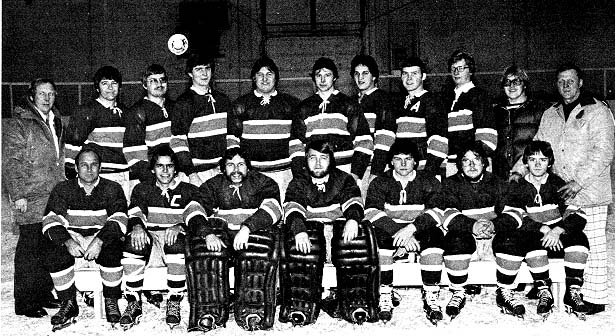 Individual awards were won by Ron Maksymec for rookie, Lorn Berg most valuable defenseman, Bert Joly best playmaker, Rock Sharkey most popular, also most valuable, and Gary Bjornstad for most improved. Rock Sharkey won the league scoring title and Dave Charlton the best goaltenders' average for the league. Attendance for the year averaged slightly over 300 persons.