This group was formed in January of 1975. Ron Barwick was approached by the Kehewin council as to the possibility of forming such a group. A tentative agreement was reached and was presented to the Indian Affairs Branch. It was agreed that Indian Affairs would be responsible for reimbursing Mr. Barwick for his services and his expenses for January thru' to May.

A suitable place to practice was once again a problem, and once again the Elk Point B.P.O. Elks came to the rescue by donating the hall for the girls. Norbert Jabeau of Kehewin did a great job of getting the basic organization going.

Enough money was raised of the girls themselves in such efforts as bottle drives raffles, and a walkathon. Mrs. Cardinal did a wonderful job of making uniforms, and the band was

on its way. The girls are natural born drummers, their marching ability is sensational. They are obedient, well mannered, quiet, never argue with each other, or those in charge. They never question decisions made by the bandmaster, consequently they quickly developed into a very creditable group.

In their first year (1975) they attended twelve parades covering a large area. For their second year a grant was received from the government. New uniforms were purchased, ten new stainless steel drums with cases, two bass drums, a set of triple "Tim Toms", and recently ten new Bel Air trumpets. During the summer of 1976 the girls were asked for a repeat performance at all the parades of the 1975 season, and they also participated in the Klondike parade in Edmonton.

There were 38 members in the band, and the year of 1977 will see an increase to about 45 members.

Attendance always seems to be the greatest problem in all youth movements, and a great many adult ones also. However with the girls of Kehewin, this is not a bad situation at all considering the poor communication within the reserve, due to lack of telephones. For this year steps have been taken to improve the situation. An award night was held recently. Four of the girls received gold medals for 100 percent attendance. Twelve had 85 to 90 percent and received silver medals, while the balance of the members were awarded inscribed gold bars in recognition of their work with the band.

During 1976 season Norbert Jebeaux found his position at the reserve too demanding to continue with the band, and his place was taken by Victor John. Victor has proven his ability to deal with all phases of band administration, and is really responsible for the outstanding improvement in this regard. Bandmaster Barwick has been given a great deal of encouragement from all groups within the Kehewin reserve, and he has high hopes of developing the girls' band into the smartest best equipped marching units in any country town in Alberta. With a new executive, most of last years girls, and many new faces in the band, this is almost a certainty. 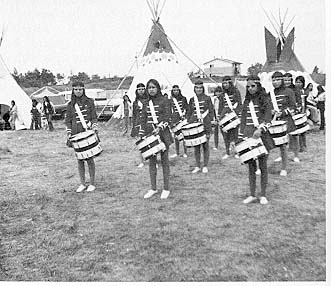