To begin with, a short run-down on some events omitted in the previous book: Prior to 1967 Elk Point Elementary was under the jurisdiction of the principal of the high school, with (Mrs.) Florence McDonell, for many years, as vice-principal. In 1967, the elementary section of the Elk Point School became a unity under its own principal and vice-principal. Wilfred Green was the first principal. He stayed for three years. Vice-Principals under Mr. Green were Helen Saranchuk, Lawrence Miller, Olga Grykuliak. In 1970 Allan Buck became principal. Olga Grykuliak was Vice-Principal until June 1976, then Don Conrad took over. For three years Don was also working with B. C. S., until June 1977.

These teachers names were omitted in the first book:

In the spring of 1977, as in previous years, our pupils entered the Country Track and Field Event, which was held at Elk Point. Many awards were received. All of our classes took part in the St. Paul Music Festival, receiving many awards in drama and one in singing. This year, 1978, we are now training our pupils for this year's festival, in Choral Speech, Choric Drama, acting, recitations and dancing.

In co-operation with the high school, both this and last semester, some of our teachers worked with high school pupils taking a Special Projects Course.

Both in 1977 and in 1978 money was raised by the students for the Telerama. As part of the OutdoorEaucation program, in June 1977, the grade six pupils went on a 3-day campout at Camp Whitney. Here they wer introduced to the basic ideas in such things as camping, hiking, swimming, canoeing, fishing, and even cleaning and scaling fish. A similar outing is being planned this spring.

This year practically every class took at least one field trip to Lloydminster, Edmonton, North Battleford, etc. This year one grade six class is planning a trip to Heritage Park in Calgary.

Many pupils received awards in the A. B. C. Contests. Some have entered the Farm Safety Essay Contest. At the Elk Point Agricultural Fair there were many entries from our pupils.

At present we have 18 teachers:

There are three janitors: Olga and Paul Musijowski, Olga Dmytrash 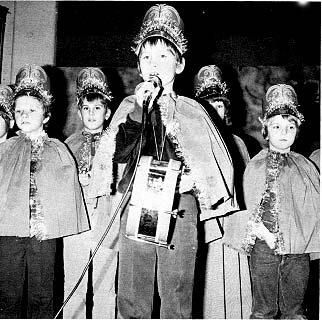