In the early homestead days one important source of income was milking cows, selling milk and butter to the many bachelors and newly arrived settlers.

But as more homesteaders got established there was a surplus of cream so the need of a cream testing station was met in 1916. Mr. William Milholland Sr. was in charge of this very necessary service. He would weigh and test the cream and pay the farmer for the butterfat in the cream. Cream received was put into forty gallon wooden barrels, and hauled to Vermilion by the local freight hauler. Sometimes Mr. Monkman, the mailman, would haul cream. Mr. Milkolland served the homesteaders faithfully with this service until 1920, when the railroad came to St. Paul. 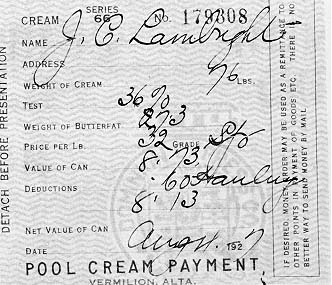 In the summer of 1922, Mr. Eddie Davis who had a store at Mooswa bought a truck and started a freight and cream haul to St. Paul. He would pick up cream at Elk Point and from any farmer along the way.

When the railroad arrived, the farmers saw the need for a creamery in Elk Point so a meeting was held November 23, 1927 for discussion, and if possible, the organization of a company to be known as The Elk Point Cream Producers Association Ltd. Mr. Love from Woodland Dairy of Edmonton was called upon to give an outline of a plan for the formation of such a company, with Woodland Dairy and Elk Point Cream Producers. It was moved by Mr. 0. Howe, seconded by Mr. J.C. Lambright, that they accept the proposition outlined by Mr. Love. The motion was carried.

March, 1928, a canvass was made to sell $25 shares to finance building of a creamery. 188 shares were sold; 89 shares held by Woodland Dairy and 99 shares held by merchants and farmers.

April, 1928, a meeting was held to elect nine directors; five from the country and four from the village. They were as follows:

Contract for the construction of the creamery was awarded to Hayward Lumber Co. and construction was begun in early spring of 1928. It opened for business in 1929 with Mr. Selmer Johnson as the first butter maker. In 1931-32 Bill Hetsler and his son Wes were butter makers, followed by Art Dykstra from 1933 to November 8, 1935. 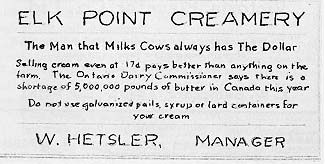 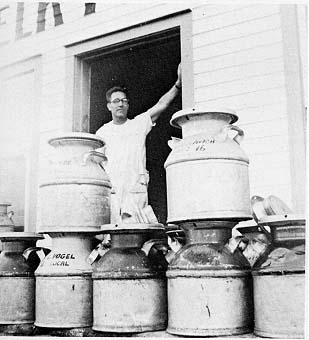 Bill Millholland at the old creamery - 1954 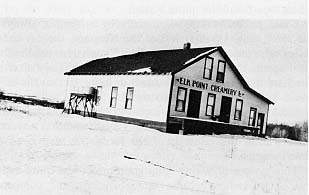 Having a lot of trouble getting a good water supply and also because of the depression years, shareholders decided it was good business to lease the creamery. Mr. Clare Johnston agreed to lease it for $25 a month and to dig a new well. Mr. Johnson operated until Bob Dale took over in April, 1938. In July of 1938, Mr. Dale offered to buy the creamery for $500 or $2.30 a share. That offer was accepted by the shareholders. After Mr. Dale passed away the creamery was sold to a company known as Elk Point Dairy Products in 1953.

A new creamery was built in 1959 and closed down in 1973. The old creamery is now being used as a slaughter house and the new creamery as a bottle depot.

Wm. Milholland Jr. started working for Clare Johnston in 1937, and continued being butter maker until 1973, except for a leave of absence for a year and a half in the late fifties.

It is interesting to note that Mr. Milholland Sr. started buying cream and his son carried on in his father's footsteps for 37 years, winning many awards for his ability to make good butter.

Now, it is back to hauling your own cream to St. Paul, Bonnyville or Vermilion.