A Ministerial Order on January 30, 1942 merged the M.D.'s of Champlain, Lincoln and Laurier in to the M.D. of St. Paul No. 542. The three secretaries, T. Theroux, A.A. Ham, and H.R. Rice had been designated as clerks-in-charge. The total unit was administered by Municipal Inspector S.V. Lea. On March 13, 1942, Mr. H. Dupre became reeve and Mr. 0. Holthe, deputy reeve. Mr. H. Rice was hired as secretary-treasurer at $1200. Mr. Ham was retained as clerk-in-charge of the Lindbergh office until the March 31 audit.

The gas rationing during the war caused the council to request a special allowance for councillors because of the need created by their duties.

Larger grants, usually of a cost-sharing nature, were forthcoming from the department to assist in the construction of better roads to meet increasing and heavier traffic. By 1944 the year's estimates for public works amounted to $88,400.

In 1945 the council organized an Agricultural Service Board. Weed control measures had been governed by the terms of the Noxious Weeds Act but weed inspectors enjoyed such limited authority that the weed situation was worsening. The Agriculture Service Board Act was based on the principle of prevention rather than cure, but did give the board, field supervisor and council wider powers in dealing with lands badly infested with weeds or with individuals who were hesitant about cooperating in the control of weeds. The first board consisted of Mr. E. Belzil, Mr. H. Dupre, Mr. W. Sutton and Mr. P. Gibeau. Mr. G. Horton of Heinsburg was hired as field supervisor and provided with two assistants. All weed control work was forthwith to be in the hands of Mr. Horton and his helpers.

A further Ministerial Order of April 6, 1945, altered the number of the district from No.542 to No.86. Mr. M.T. Grekul became secretary in 1945 at a salary of $2500. The snow plowing issue of the time was settled by a motion to use municipal equipment to clear the main market roads.

The completion of the eastern gap in the railway lines was supported again in 1946.

In 1946-7, a delegation from Elk Point promoted the improvement and completion of a highway from St. Paul to Elk Point (or vice versa).

Mr. O.J. Fish resigned as member of the board of the Elk Point Hospital, having served since 1928. Mr. Eric Arnott was appointed to replace photos

The farmers' month long strike of 1946 received the attention of the council. The members supported both the strike and the A.F.U. brief.

Road foreman of the time was Mr. Joe Doucet.

The School Division Board approached the council regarding snow plowing school bus roads. This, of course, was one of the contentious issues that would culminate in the formation of a county.

In November, 1949, notification was received from the Forage Crops Branch that the Department of Agriculture had decided to discontinue the Forage Crop Seed Distribution Policy.

Westward movement of the Norway rat posed a new threat in 1950; Mr. S. Powers, field supervisor, was appointed to inspect for the presence of rats in the district and to tal immediate action if and when the prevalence of rats had be( reported or established.

Civil Defence was a topic of continuing concern until the 1960s.

The Red Cross application for permission to construct pier on N.W. 9-56-4-W4 was approved on condition that it l available to the public. The decrease in farmer numbers was made apparent at ti February, 1957, annual meeting by expressions of concei over the "away from the farm" movement. Crop estimates in 1958 were recorded at six bushels cents acre. At the meeting of the council in January, 1960, there w. reference to the Unthreshed Grain Assistance Policy, so can be presumed that the 1959 season was not a favorable one.

In 1960 the municipal district provided prize money fi a Weed Essay Contest which was conducted on a Municip District-Provincial-International basis. The three winners tin year were from the Grade IX class at the Elk Point Schoc Harriet Fidler won first; second, James Povaschuk; thir' Allan Pankiw. The Whitney Lake recreation area benefitted by $1529.25 grant under the Provincial Parks Program. A resolution was passed in 1960 also that the Minister ( Agriculture set up the area as a Bang's restricted area.

In May, 1961, a delegation representing the St. Paul School Division interviewed the council regarding the formation of a county. The delegation stated that the board was unanimously in favor of the formation of a county. There was an obvious lack of enthusiasm on the part of the municipal council and there was disagreement over boundaries, but the proposal proceeded to the ultimate end.

The following is a list of councillors of the M.D. of St Paul No.86 for all the years of its existence: 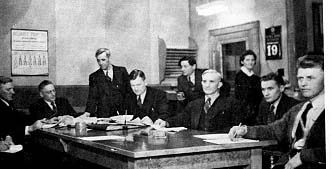 A Council of the M.D. of St Paul, 0. Holthe, representing the area east of Elk Point, on the right.

Rates for attendance at meetings and for supervision were set at $15.00 a day, with mileage at 12 cents. Subsistence where approved was set at $7.00 a day. r As was the case in the large municipal district, the functions of the county council related to a very large region and only in some aspects did the deliberations refer to Elk Point and then only in a general way.

In January, 1963, Mr. P. Stepa became the representative of the town of Elk Point on the School Committee.

The motion was passed in 1963 that the council request the Federal Department of Agriculture to establish the county as a Federal Brucellosis Control Area.

In 1963, it was also resolved that an application be forwarded to have the county declared a Pilot Project for  A.R.D.A. This followed consultation with District Agriculturist Chevrette.

Civil Defence was a continuing topic in the early 1960s and in 1973 a Civil Def'nce Unit Agreement was entered into between the county of St. Paul and the town of Elk Point.

In 1964 the motion was approved that the county be declared a disaster area as far as feed was concerned and that application be made for assistance to import feed.

The Winter Works Incentive Program that winter comprised the following benefits: brushing and burning growth on road allowances, and surveys -- $49,200.

By 1965 wages for the common laborer had increased to $1.15 an hour. In that year, 1965, Mr. M. Grekul resigned as secretary and Mr. A. Roy was appointed to the position. He has continued in that office to the present.

Councillors fees for meetings and for supervision were increased in 1966 to $20.00 per diem.
Members to the Regional School Board were elected by the county council effective January, 1967. These first two members were Councillors Cote and Chapdelaine.

One noticeable item in the 1968 minutes was the mention of an expenditure of $1 000,000 on the Elk Point-Lafond Contingency Road. An additional $15,000 was approved later by the Department of Highways. This is not to imply that the figures listed here indicate the total expenditure; that fact is unknown.

An attempt to secure a Seed Cleaning Plant in Elk Point is illustrated by the appearance of a delegation to the June, 1968, county meeting. The council requested more data. A later delegation, in October, representing the Elk Point Chamber of Commerce was also instructed to secure more data, this time in terms of shares actually sold and the extent of the area expected to be served by the proposed plant. In June, 1969, the district agriculturist was requested to make a survey regarding the potential of such a plant. He recommended against the construction, and accordingly the project was dropped.

Civil Defence was still a priority; in June, 1969, the council approved a Civil Defence Agreement together with the towns of Elk Point and St. Paul. Again, in April, 1970, the E.M.O. Survival Plan submitted by the St. Paul Emergency Measures Organization was approved by council. 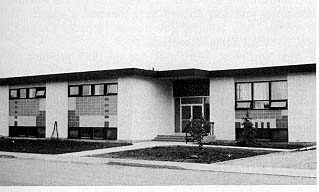 The present County Office was formally opened on June 27, 1969, and the new County Workshop for machinery was completed in November 1974.

The present assistant secretary treasurer, Don Zarowny, was appointed to the position on July 1, 1972.

When legislation was passed to form an Agricultural Development Committee to replace the Farm Purchase Board, the council elected Mr. J. Drobot to represent the county on the committee.

Adult Education had become a fact in the county area with approval of a motion in December, 1973, to form a local Further Education Council. This resulted from interest expressed from Elk Point.

A poll was held on October 16, 1974, on a question to increase the municipal mill rate up to 4 mills for recreational purposes. The results were 309 for and 902 against.

There is mention in 1975 of Alberta Disaster Services, and in December of that year a Peacetime Disaster Plan submitted by that organization was approved by council.

A request from the Town of St. Paul in August, 1975, that councils of the towns of St. Paul and Elk Point, and of the County of St. Paul, meet to discuss cost-sharing of services was approved. This occasion has to be ranked as an historic one in terms of development of local government, and it is a good item with which to end this section.

The county system has been in effect since January, 1962. There is no suggestion at this time that a return to the former divided functions of school and municipality is being contemplated in even a casual way.
Tax notices for NW 9-57-6-W4 follow. They illustrate the change in taxes from 1913 to 1976. The levy in 1913 was based on a rate of 1 1/44 per acre; 1976 taxes are calculated on land assessment multipbed by the current mill-rate of 83.30. There has been a corresponding increase in services - municipal, school and hospital - in the interval 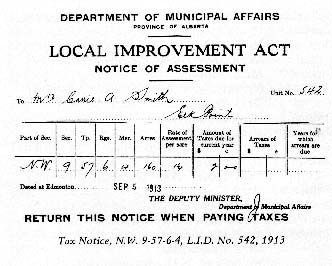 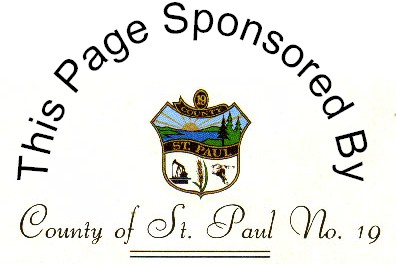