Mail service in this area was originally very uncertain and carried from the East by anyone who happened along, mainly Hudson's Bay men. After the 1820's, a regular winter packet was carried by dog team from Fort Garry (Winnipeg to Norway House, Manitoba. From there a runner carried this packet to Fort Carlton where he met a runner frorr Edmonton who would return the mail up the line to Edmonton. This service, once every winter, was gradually increased so that around 1870-75 there was an overland mail service once every four to six weeks along the old telegraph line.

In the early 1870's, steamboats were introduced on the Saskatchewan. In 1874 the Northcote made the first complete trip from Prince Albert to Edmonton. Soon, two companies were making regular trips up the Saskatchewan in the ice free months. This brought a better mail service to the area.

The steamboat service was later replaced by the ever expanding railway lines. By 1904, the Canadian Northern Rail way line ran from Saskatoon to Edmonton parallel to the North Saskatchewan. The mail was then carried by loco motive throughout the country.

Some of the earliest settlers in the Elk Point district (about 1905-06) secured their mail at Vegreville, a point on the railway line approximately 100 miles southwest of Elk Point. Within a year or two they were able to pick it up at Vermilion, forty miles south of Elk Point.

In 1908, a post office and store owned by Mr. J.S. Valentine was established at Hopkin's ferry, approximately four miles west of the present bridge. A Mr. Screeton freighted goods and mail from Vermilion to Hopkins'. Miss Mary Ross was the postmistress until December 1910, when Mr. J.S. Valentine took over upon her resignation.

Around the same time there was a post office at Caskeyville. In 1910 the postmaster was John Robinson. The mail was carried to Caskeyville from Vermilion across the Saskatchewan at Hopkins' ferry by Mr. P. Leveille. In March, 1910, Mr. J.B. Caskey secured that mail carrying contract.

In 1909, a post office was established in Elk Point on Mr. Charles Hood's farm. At this time, mail for Elk Point came via Vermilion and was addressed Vermilion, Elk Point, Alberta. It took about two weeks to send a letter from Elk Point to Vermilion. In December, 1910, petition was made to have the mail come semi-weekly. Commencing May 1, 1911, Elk Point had two mails a week.

The mail was carried from Vermilion to Elk Point by way of Hopkins' and Caskeyville until 1915. Beginning in July, 1915, mails were carried direct to Elk Point crossing the river on the Elk Point ferry. From then on the offices at Caskeyville, Orvalton and Lake Eliza were served from Elk Point. The courier from Vermilion to Elk Point covered Angle Lake and Northern Valley. In 1915, the original post office at Hopkins' was closed. The Spring Park district also had a post office at this time. It was on the farm of Mr. Lester Smith who was postmaster from 1916 to 1948.

Mr. Charles Hood was postmaster from June 15, 1909, when the post office was established, until 1928. The office was orginally situated about one half mile east of the present medical clinic on Mr. Hood's farm. A few years later, it was moved to the old section of town just east of No.41 Highway where Mr. Hood had his hardware store.

In 1913, Mr. J.B. Monkman became the mail carrier, Mr. Monkman, previous to this was the postman at Pequis, about one mile south of the present town of Derwent. He carried the mail from Vermilion until 1928 when the mail came direct to Elk Point via the Canadian National Railway. The last overland mail was on Saturday, March 31, 1928. During Mr. Monkman's fifteen year employment, he never missed a mail except for a two week period in 1925 when he went to Edmonton for treatment for spine trouble, possibly the result of continuous driving. During his career, Mr. Monkman drove a distance equal to several trips around the world. He crossed the Saskatchewan by ferry and rowboat in summer. In winter he crossed the ice by sleigh, wagon and truck in temperatures as low as -63. At spring breakup, Mr. Monkman improvised a cage attached to the ferry cable that swung across the river.

In 1928, the post office was moved from Mr. Hood's store to the front of Mr. Joseph Quin's home in the new townsite. That building is now vacant, and is located across from the present Macleod's store. Joseph Quin was postmaster from August, 1928 until his death in 1937. Between November 1937 and 1945, (Mrs.) Ruth Quin, Joseph Quin's wife, was postmistress at the same location. After Mrs. Quin resigned, her son Robert became postmaster. At this time the office was moved to a new building the Imperial Lumber Company had built and rented to the federal government. This building is presently the southmost section of the Imperial Lumber building. Robert Quin was postmaster until Mr. Fred Kryvenchuk took over the duties on February 4, 1964. 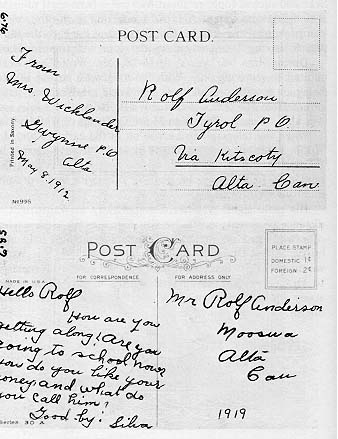 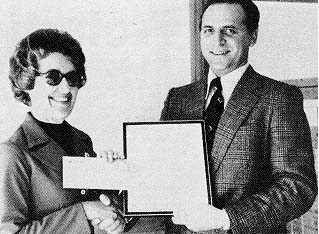 She succeeded her father who was Post Master for 14 years. 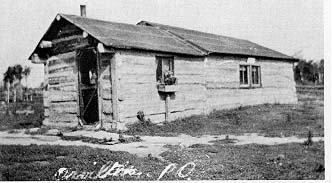 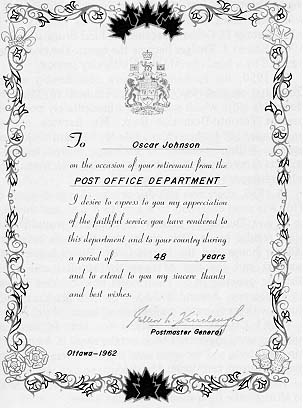 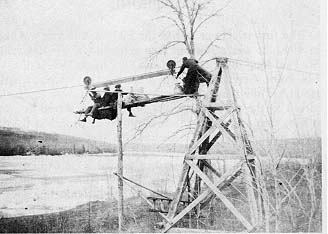 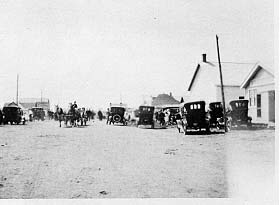 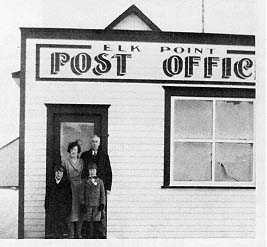