When the British gave a charter to the Hudson's Bay Co. in 1670, they granted to that company all the land whose waters drained into Hudson's Bay. These waters included the Saskatchewan River system, which reaches back for its origin to the Rocky Mountains. This entire area was called Rupert's Land and became the fur-trading area of the Hudson's Bay Company. 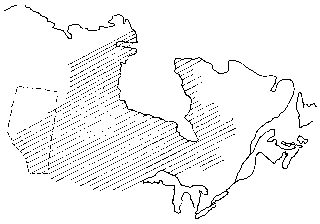 The Hudson's Bay Co. performed whatever government functions that were attended to, especially so after the two companies -- North West and Hudson's Bay -- merged in 1821. These functions included the administration of justice and the protection of employees from attack by Indians. There were efforts also to resist the encroachment by American traders and whiskey merchants. The company ceased its role when the charter ended in 1870.

In 1763, at the conclusion of the French and Indian War, by the Treaty of Paris, France ceded to Britain all claim to the mainland of Canada. Little was known about the vast western area and not all of it had even been explored.

When the Hudson's Bay Company surrendered to the British Crown its charter and claim to Rupert's Land in 1870 the Crown, in turn, transferred both Rupert's Land and the Northwest Territories beyond it to the Dominion of Canada. A form of Territorial Government was set up which laid the foundation for both provincial and local government.

The Manitoba Act of 1870 set up a mini-Manitoba and also created a Northwest Territories, which encompassed all of Western Canada, except the colony of B.C. The Lieutenant Governor of Manitoba served also for the Northwest Territories and was assisted by a nominated council. This, of course, was colonial government, actually Crown Colony, not local self-government.

The Northwest Territories Act of 1885 provided for a Lieutenant Governor and appointed council of five for the territories. However, whenever any area composing 1,000 square miles could claim an electorate of 1,000 persons, then an electoral district could be set up and a member elected to the council. (This did not include Indians, since they did not receive the right to vote federally, mitil March 31, 1961, and provincially, until April 12, 1965.) The Elk Point area was not to benefit from those regulations since there were too few trappers and traders to merit representation. The capital city for the Northwest Territories until 1883 was Battleford, but it was moved to Regina in that year. 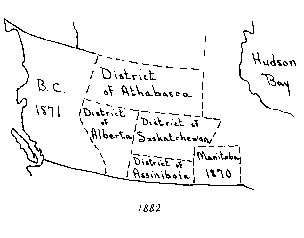 In 1882, the council divided the southern portion of the Northwest Territories into four political districts--Assiniboia, Saskatchewan, Athabasca and Alberta. The district of Alberta was named to honor Queen Victoria's daughter, Princess Louise Caroline Alberta. The spot on the map that was to become the location of Elk Point can safely be presumed to have originally been in the District of Saskatchewan, since our location is at 110 degrees 54' West longitude and the western boundary of the District of Saskatchewan was about 111 degrees 30'W.

Because it was the ultimate destiny of this area to become part of the province of Alberta, I will deal with our history as though we were part of the earlier district of Alberta. This perspective conforms to information received from the office of the chief Electoral Officer. The list of names of the Federal Members of Parliament who have represented this area was compiled by that office and must be correct.

By 1883 population in the district of Alberta entitled the area to one council member, by 1885 there were four members, and by 1891 there were nine Alberta members in what was called, after 1888, the Northwest Territories Legislative Assembly. The voting population of this potential constituency, composed of the rare trapper or trader, was insufficient to warrant election of a member. In 1888 the structure of the Northwest Territories Council was changed and it was then known as the Northwest Territories Legislative Assembly. From that body the Lieutenant Governor selected, starting in 1897, four men to form an Advisory Council, which, in effect, was a Cabinet. This was an important step toward attainment of fully responsible government.

The area became part of the Federal Electoral District of Calgary in 1903 and was represented after 1904 by Maitland S. McCarthy, Conservative. 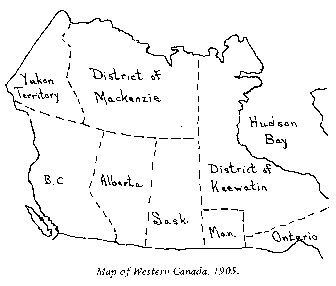 Following the granting of provincial status to Alberta in 1905, the federal electoral boundaries were amended in 1906 and the area became part of Victoria Electoral District. From 1908 to 1917 the M.P. was William Henry White, Liberal.

Redistribution took place again in 1914; at that time the area became part of the Electoral District of Battle River. The constituency elected William John Blair, a Unionist, in 1917, but switched to Henry E. Spencer, Progressive in 1921.

We have been in the Athabasca constituency continuously since 1924 and have been represented in the Federal House of Commons by the following: