The year 1977 saw the council in its fourth year of operation.

Members of the council were as follows:

Mr. Matveyenko joined the staff of F. G. Miller for the term 1977-78 and at that time was invited to become a member of the council. 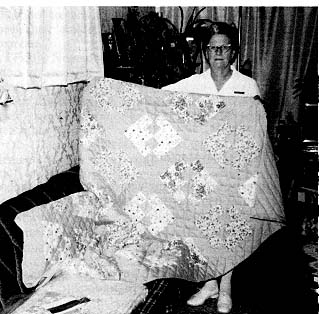 Quilt made by Further Education Class under the instruction of Mrs. Violet McFadyen

The quilt won first prize at the Elk Point Fair.

The council met as a total body on several occasions to discuss plans for the new courses and improvement of the old ones. It is the desire of the council that each member representing a group has contact with the membership of the group and is thus in a position to speak for a number of people.

Among the courses offered in the sessions during the winter of 1977 were Bishop Method of Sewing, Basic Sewing, Ukrainian Cooking, Crochet I and II, Art of Easter Egg Decorating, Beadwork (Heinsburg), Cross-Country Skiing I, II, III, Let's Make Music, and Cree. In addition to these, Lakeland College sponsored some with which we helped in the coordination.

During the course of the winter and spring, Sid and I were able to take advantage of several workshops on adult education. We both attended one in Vermilion and I attended one in Edmonton. After four years with the council I felt the need to give up the coordinator's job since I was not able to do justice to it and my job at the school as well; thus in June of 1977 Gwen Nelson was hired to take over the job in November when the annual meeting was held. Little did she know that she would become full time coordinator with just a very little help from me in September; however, she became active then and the fall courses which she was responsible for setting up included Needlepoint, Elk Point; Basic Car Care, Heinsburg; Physical Fitness, Heinsburg; Hair Care, Elk Point; Sewing with Denim I and II, Elk Point; Crochet and Cake Decorating.