Submitted by A. J. Bartling

Buck Eaton is more or less the father of the Elk Point golf course. He laid out the course. He measured all fairways. I think Bill Milholland helped in the tape measuring. Buck made all the fairway and yardage signs and posts, painting, numbering, and also erecting. Buck and A. Bartling spent three Sundays digging the sod off the greens and hauling same away with team and dray. We had to do this work on Sunday, because I was busy in town on weekdays. We also used the dray to bring sand for greens. Buck was a good golfer. He had played at the Highlands golf course for years but I was not the best golfer myself. Buck did help me to cut down about nine strokes on the nine holes. 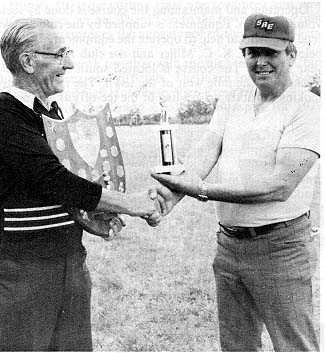 The executive for the Elk Point Golf and Country Club for the year 1977 consisted of President Ronald Seal, Vice-President Steve Shmyr and Secretary-Treasurer Emil Mudryk. Wm. Milholland has been appointed grounds keeper for the next season; his responsibilities are to make sure that the golf course is kept in good condition at all times, making it better play for the golfers who may use the course.

Over the past two years there tends to be more people taking up golf. This is indicated by our local club fees as well as by green fees, which have been on the upswing.

Memberships sold for the 1977 season were approximately thirty-five, this including family memberships, single men, single ladies and juniors. The club memberships have increased by 15% over the past year of 1976, which makes for a better and more active club.

Annual club events are as follows: Men's Open Tournament is always held on the first Sunday in July. We attract approximately fifty to eighty golfers for this annual event. The club Wind-up Championship is held in early September, giving all local members a chance to partake. There is not enough interest shown by the local lady golfers, therefore we do not attempt to carry out an open tournament.

There has been a definite interest shown by our young golfers; as a result the club may be looking into holding an annual junior open tournament.

The golf course is, as well, available to any other organization or club who may want to use it during the summer months.

Operating and maintaining the course is done by local voluntary help. Equipment is supplied by the club and we tend to hire local help to operate the equipment. The land belongs to Dr. K. C. Miller and the club leases it from year to year. The course is located south of the R. R. tracks and one mile west of the town. The members are looking to future up-grading of the tee-offs as well as the greens. Also with more members attracted to our club, we may be able to supply a club house, with the possibility of grassed greens on an eighteen-hole course. 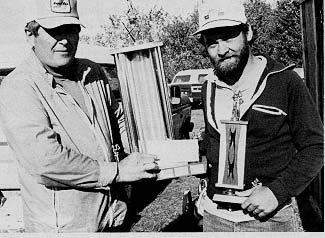 As secretary-treasurer I must say, for the size of the club, that we are quite an active group, and have high hopes that in the future we will grow larger, have a more attractive course and make it a better place to golf for young and old. 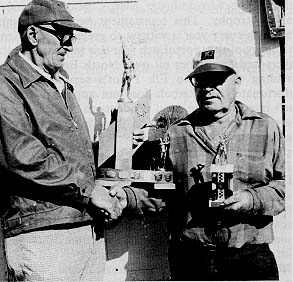