The telegraph was the forerunner of all systematic communication in the west. Confederation had been achieved with two main items concerning Western Canada. First, the promise of a transcontinental railway to British Columbia; second, the settlement of the West to stop American encroachment on Canadian lands and provide an agricultural base for the rest of Canada.

In July, 1874, the Royal North West Mounted Police was formed and sent to police the Northwest Territories and make way for settlement. This move necessitated a telegraph line for communication with Winnipeg and Ottawa. The line was constructed along the original survey of the Canadian Pacific Railway from Selkirk to south of Edmonton via Livingston, Clark Crossing and Battleford. The western section of the line (Battleford to Edmonton) was completed November of 1876, but only offices in the eastern section (Selkirk to Battleford) were opened immediately. The tariff then was as follows:

The telegraph was not extensively used at this time partly due to the high tariffs and partly because of the unreliability of the line. It was subject to prairie fire, buffalo hunting and moisture on the line. 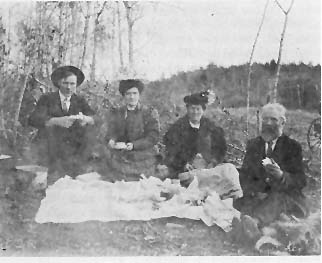 The real worth of the telegraph line was realized during the Riel Rebellion. The telegraph enabled the R.N.W.M.P. and the militia to communicate with Ottawa before Riel's forces became too organized.

In the fall of 1884, the Department of Public Works decided to change the route of the western section of the telegraph line from the old Canadian Pacific Railway survey. The original line was south of the North Saskatchewan River, but there was no settlement through which the line passed. However, Onion Lake and Saddle Lake, north of the river were without communication. The new line was built from Battleford crossing the river at Fort Pitt with offices at Pitt, Mooswa, Saddle Lake, Pakan and Fort Saskatchewan. From Battleford to Pitt, the poles were made of iron, an innovation for this part of the country. From Pitt to Edmonton the line was built of tamarack poles.

The dividing or central point of this line was at Mooswa, which was located on the river bank where the Canadian Salt Plant curling rink is now (S.W. 1/4-26-56-5-4). This was an important point because heavy duty copper zinc batteries were stored here for use at other points. The old Indian or Pitt Trail followed the line and was used for cross country travel. Mr. John McCartney was the first telegrapher at Mooswa.

In April, 1910, the government established a telegraph station with Mr. Ed 0. Boyd, a linesman, about three miles west of Elk Point (N.E. 1/4-10-57-7-4). In the same year, Mrs. Harry Bowtell became the telegraph operator at Frog Lake.

The Vermilion Standard of May, 1913, notes that (Mrs.) Maudie Hunter made application to open and operate a telegraph station at Caskeyville. Mr. John McCartney taught Maudie Hunter who lived one mile west of Elk Point and 1/2 mile south on S.W. 1/4-2-57-7-4 to use the telegraph. Before there was a telephone in the district, she received and transmitted messages mainly emergency messages for the doctor in St. Paul.

On March 21, 1921, Mr. Ray Keitges opened the first telegraph office at Elk Point hooking up with the Canadian government line. Mr Keitges had the telegraph office from 1921 to 1927 when the line was discontinued. 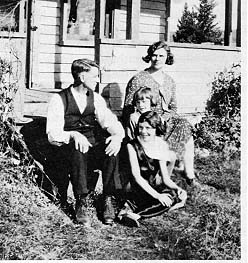 The Art Bowtell's about 1931. He was the last telegrapher at Mooswa

In 1921, William Wolfe, who was a settler living on N.E. -34-56-6 W.-4, obtained a license for an Amateur Experimental Radiotelegraphy Station, Transmitting and Receiving. The license covered all waves, radio and police. The wave was 200 metres long, or about four miles from crest to crest. The call letters were 4 AN; the 4 referring to the four western provinces, the A to his first license and the N to the fourteenth license being issued in the four western provinces.

During the war years, 1914-18, Mr. Wolfe had been limited to receiving only. With the long wave he was able to bring in news from all over the world. He received news direct from Bordeaux, France; Wales; Norway; Hawaii; and was able to read messages in Morse Code out of Washington.

When the telegraph strike was on in the early 1920s, Mr. Wolfe received news radioed in code from Calgary to Edmonton and which didn't appear in the papers until the next day. In this way, he kept an otherwise isolated community well informed.

His radio signal was heard as far away as Wainwright, a distance of seventy miles. He sent messages for settlers who, otherwise, had no method of obtaining medical help in a hurry. After Dr. F.G. Miller arrived in 1920, Mr. Wolfe would radio St. Paul, then have St. Paul phone his message to Dr. Miller. This saved settlers time in case of an emergency and also many miles of travelling to Elk Point for the doctor.