The first organized minor hockey club started in the fall of 1967 with a young teen team named the Elk Point Hawks.

The town of Elk Point paid $120 per month to this hockey club for looking after the outdoor hockey rink. Bill Babenek was the coach for this team. The following season brought about a request from the Recreation Board that the town consider the construction of an indoor arena.

The 1969-70 season found four organized teams: Midgets (16 years and over), Bantams (13 to IS years), Pee Wees (11 to 12), and Mites (10 and under). Ice conditions were generally good. The snow was cleared and thrown over the boards, where spectators would perch and cheer for their favorite team. Caretakers for this season were Mr. Tony Glyaniuk and Mr. Pete Bayrock. This season ended with the Elk Point Recreation Board stating that its aim for 1970 - 71 would be the beginning of an indoor arena. Costs and buildings were investigated. On May 12, 1970, a walkathon was held front St. Paul to Elk Point in which $1300 was earned and handed over to the arena fund. Thus resulted in the inauguration of the Elk Point Arena Board, which consisted of Dr. D. Didow, president; Allan Buck, vice president: Barry Golberg, secretary treasurer: and Ed Pankiw. Ken Palamerek and Paul Stepa.

The 1970-71 season gained a few more boys and there were five teams: Midgets, Bantams, Pee Wees, Mites and Tom Thumbs. The Tom Thumbs (8 years and younger) were a new addition this year. These were the most enthusiastic boys. At twenty or thirty below they would phone their coach to find out if the practice or game was "still on". It was difficult to determine who enjoyed these games more: the players or the noisy spectators.

The town supplied the facilities: a heated changing building and flooded ice. Skating fees were $1.00 per person for the season or 25 cents for each day.

The 1971-72 season saw the Recreation Board and the Elk Point and District Lions Club working together to find coaches for the teams. The Lions Club supplied much needed equipment and agreed to sponsor minor hockey that season. Caretakers for the rink were Mr. Dan Josul and Mr. Joe Zarowny. A coaches clinic was held in St. Paul for local volunteers and some of the older boys attended. Those were Bob Krawchuk, David Bespalko. Allan Slywka, Bill Babenek and Victor Stepa. They were a great asset to the hockey teams and this training helped in the subsequent years.

For two years the Arena Board and eventually the Elk Point and District Agricultural Society spent endless hours at meetings. planning and eventually having constructed, the present A.G. Ross Agri-Centre. The arena was ready for use in the fall of 1972. A minor hockey board was formed which operated under the Elk Point and District Agricultural Society. Some initial members of the minor hockey board were Albert Boratynec, Ron Onusko, Ed Soldan, Bob Krawchuk, Doug Berg, Marvin Bjornstad. Harvey Aarbo, Ray Hellquist and Ralph Mann. Sponsors were obtained for the teams in 1972. The sponsors provided sweaters and socks, as well as goalie equipment for their team. The Tom Thumbs were sponsored by the Elk Point Hotel and the Elk Point Co-op. Mites (age 9 and 10) were sponsored by Tredger's Drugs and the Chamber of Commerce. Pee Wees (age II and 12) were sponsored by the Lions Club, and the Bantams (age 13 and 14) were sponsored by the Elks Lodge. A sum of $1390 was donated by the above businesses and organizations to launch the minor hockey teams in the newly constructed arena. This first year one hundred and five boys ranging in age from four to sixteen joined minor hockey teams. 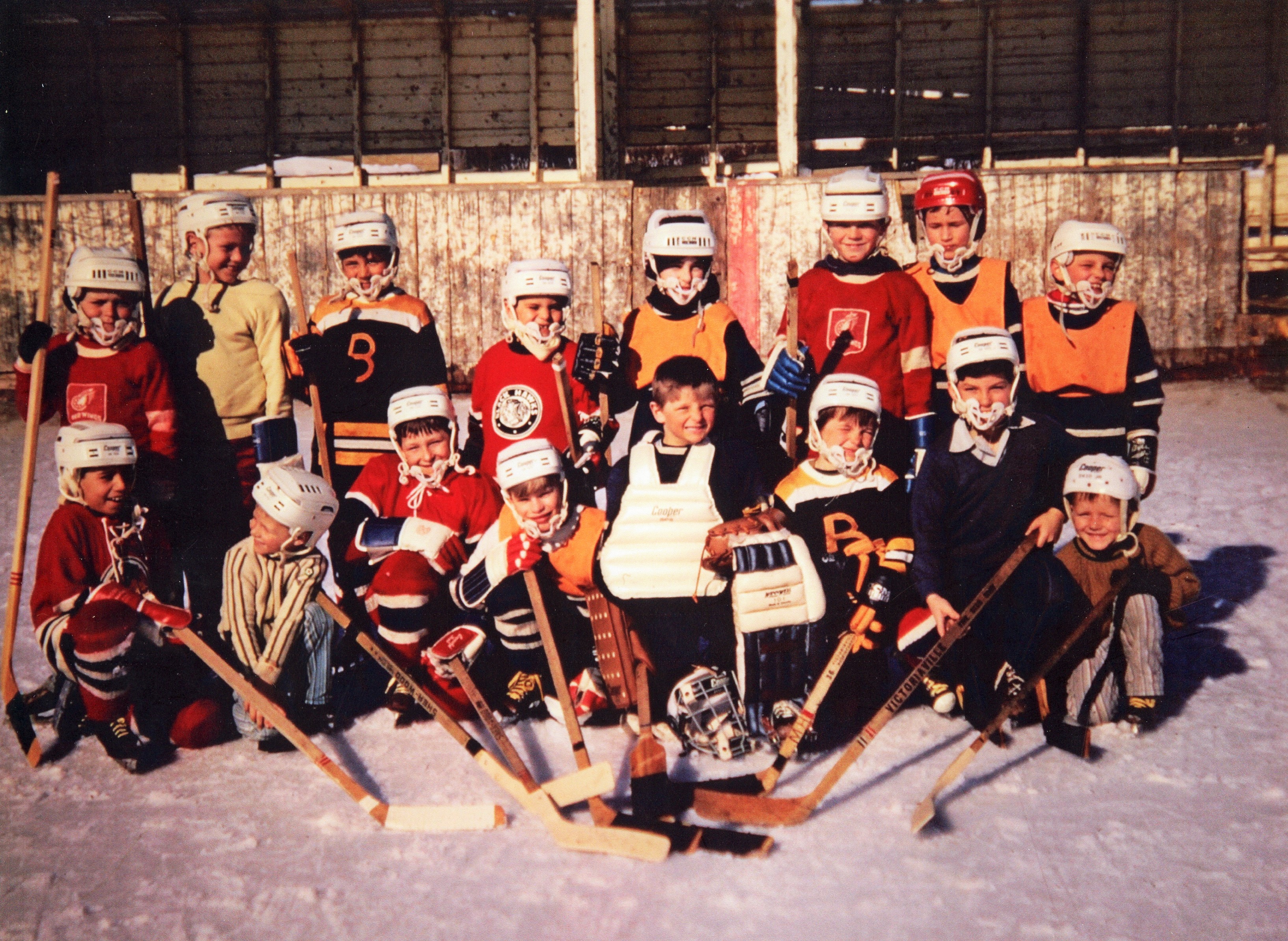 Walter Skolarchuk was the arena caretaker this season.

By the 1973-74 season the arena was well in the swing of things. The boys had learned that the can went on before the pants and the elbow pads before the sweater. A common sight was several boys, duffle bags over their shoulders. heading to the arena for a practice or a game. This season a total of one hundred and two players registered for the teams from Tom Thumbs up to Midgets. The High School Students Union sponsored the Midget learn and equipped them with much needed sweaters and goalie equipment. This season all teams joined a league with Vermilion and Manville. Mr. Paul Musyonski was the arena caretaker and also undertook to sharpen skates.

The 1974 - 75 season started off with one hundred and duce boys, and two new sponsors were added: the Gulf Bulk station (John Wozniak) and Paul Stepa's Insurance. A referee's clinic was conducted in the arena by Mr. Don Cyr of Bonnyville which helped the quality of hockey and sportsmanship for our minor system. Each age level was divided into two teams with ten to twelve players each. Mr. Paul Musyowski again took on the job of arena caretaker, and Mr. Ronald Flanders assisted hint.

The 1975-76 season again was a year of fun and hockey for all one hundred boys who joined the minor system. Teams travelled to neighboring towns such as Glendon, Vermilion, Vilna, Bonnyville, Cold Lake, Medley, Dewberry, St. Paul, Andrew. Two Hills and Grande Centre. The Bantams were successful in their bid for Provincial Play-off where they represented their zone. They travelled to Canmore, where they came in second in the Bantam "D" play-downs. Mr. Ronald Flanders and Terry Gusnowski were the caretakers. The season ended with thoughts and plans for artificial ice to be installed in the near future.

It has become the custom that each team level hold a one day tournament hosting several nearby towns. These have become very popular and will no doubt continue for many years to come. It has also become part of the minor hockey philosophy to stress participation, fun, sportsmanship and winning, hopefully in that order. All teams are supported by the parents and the community as a whole. As applied here, the minor hockey system has developed a fun yet competitive style of hockey for the boys in the community.