THE HISTORY OF THE DION FAMILY

Kehewin's present chief Joe Dion Jr. can trace his family tree to that great chief, Big Bear. Chief Big Bear was a kind, patient and compassionate man, but at the time of the unrest just before the rebellion of 1885, he was getting old and could not quell the impatience of the young men. Big Bear died about 1888.

Chief Big Bear had three sons and one daughter. One of his sons was Gustave Dion. This son married and lived on the Kehewin Reserve. It was during the early days, when Dr. F.G. Miller first started medical practice in Elk Point that Mrs. Gus Dion helped him to deliver babies. Many times Mrs. Dion delivered babies herself, as she was an experienced midwife.

Mr. Gus Dion was chief of the Kehewin Reserve for some time. Mr. and Mrs. Gustave Dion had six children, four boys and two girls named as follows: Joseph, Toots (Tousaint), Mary, Billy, Madeline and Alphonse. In 1977 (Mrs.) Madeline Jenkins is the only survivor of the six Gus Dion children. Joseph went away to school and he became a teacher who came back to teach school on the Kehewin Reserve for approximately twenty-four years. When Gustave's son Billy grew up he was chief of the Kehewin Reserve on more than one occasion. Mr. and Mrs. Billy Dion had ten children named as follows: Peter, Roland, Joe Jr., George, James, Maggie, Rosanna, Florence. Madeline and Alice.

Chief Joe Dion, great grandson of Big Bear, as a boy went to school, completed his high school and spent some time at university. He told me while he still worked in Edmonton that he was anxious to come back to Kehewin and take over his father's farm. This he has done and as chief for the second term of two years in 1977, he has certainly given his people great leadership. Chief Dion married Leona Makokis and they have one child Myles Dion. 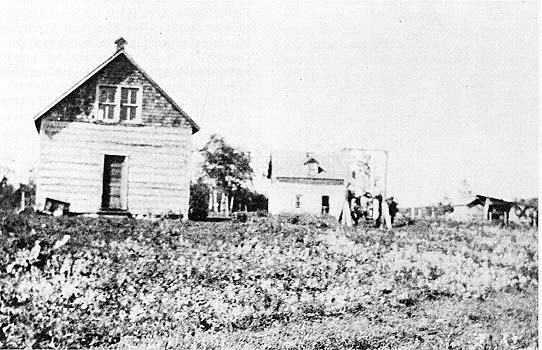 First Kehewin Day School on the Reservation. Joe Dion Sr was the teacher 1916