The organization of the Ukrainian Greek Orthodox Church started in the spring of 1945 in the town of Elk Point, Alberta, was the first of this kind in this area.

In 1946 at a service in the Fred Shpeley building the first executive was formed, the members were as follows:

This executive started to canvass for members, and funds, to purchase two lots behind Markstad's Garage which they bought affer enough funds were raised. In 1948 the church was officially named St. Vladimir Ukrainian Greek Orthodox Church of Elk Point, Alberta.

The ministers held their services for whatever was collected in the collection plate. This gave them room and board, and about $7.00 a service. They came from Glendon or Smoky Lake usually by train.

At that time Mr. J. Borutski donated timbers in the bush for the walls of the building of the new church.

In the winter of the year 1949, members of the church went to the bush to cut down the timbers that would in time be part of the church. These men worked at this:

Then the timbers were piled and left to dry.

Since more money was needed for the building of the church the ladies of the congregation held chicken dinners, which was quite a feat in those days. They had to go and get the chickens from the people by car, then take them home, clean them and prepare them. The following ladies were the ones who usually did all this:

Then the ladies had to rent dishes from the Beaver Lumber Co. and bring some from their own homes. They held open air dances at the Woytowich farm in the summertime and in the Christmas season they would go caroling from farm to farm, which was also not too easy at that time of year. They would have to shovel themselves out if they got stuck in the snow, but all in all they used to have a good time.

The two lots of land originally bought for the church was sold to Mr. H. Shewchuk.

In 1951 the Rev. Boychuk blessed the land that the church building was to be built on and he blessed it as the site for the St. Vladimir Ukrainian Greek Orthodox Church of Elk Point. Mr. J. Zacharuk dug the basement for the church with a tractor and a frezno, and a lot of volunteer help from the other members with pick and shovel. Some of the cement was poured right away. In 1952 the balance of the cement was poured and they started to erect the walls under the supervision of Mr. J. Borutsky and volunteer help. Then the roof was put on under the supervision of Mr. Goalka and again a lot of volunteer help, most of the delivering being done by Mr. 0. Woytowich who owned a half-ton truck at the time. These volunteers helped at the time:

The ladies supplied lunches for the working men, or took them home for meals. 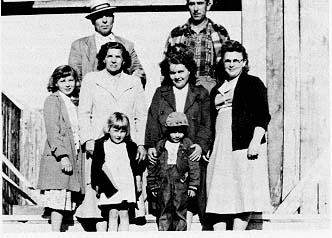 In 1955 the stucco was applied to the outside of thechurch in the winter time. A few services were held in the summertime in the church and others were held in the Legion or the Libich residence on main street.

In 1956 to 1957 the church was rented to the county of St. Paul for a class room and in the meantime money was being raised to finish the inside. In 1958 the congregation started to fmish the inside, the second floor was laid, and the plaster board was put on the walls, the choir area and the altar were built and varnished. The benches were built and varnished, and painting was done by Mr. B. Eaton and volunteer help. Mr. Mike Buck did the wiring. The church fixtures,and pictures were donated by the following members:

Services started to be held once a month, and weddings, funerals, and christenings were held in the church as occasion demanded.

In 1959 it was decided that the cemetery was not possible at the site of the church so Mr. and Mrs. F. Shewchuk donated to the church for a cemetery, the plot of land still in use at the present time.

In 1961 Archbishop Andrew, Rev. Greschuk, and Rev. Dorash blessed the cornerstone of our church, which was a great day for our congregation, and Anthony John Bochon had the privilege of being christened on this occasion. 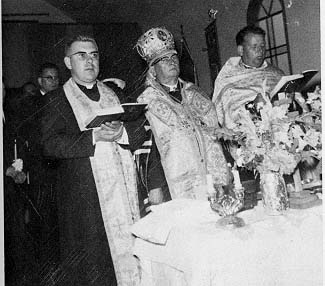 In 1962 and 1963 Mrs. A. Gregoraschuk and Mrs. A. Twerdy undertook the project of holding classes for the young people of our church, teaching them singing, reading, crafts, and religion in Ukrainian. The children were taken caroling, sleigh riding, and tobogganing in the winter months. On Mothers Day a concert was held in the Elk Point School and all the crafts were displayed. Many of the crafts were taken home and provide lasting mementos.

Then again under the leadership of Rev. and Mrs. 0. Sorochuk the church acquired land at Moose Lake for the children for a summer camp. Under the leadership of the good minister and his wife and all the parishioners, buildings were moved from the Wainwright Army Camp and then set up. The name of the camp was Kews Ki Hi summer camp. The youngsters were sent there in summer time to enjoy themselves. Then a little church was moved there from Therien, Alberta and services were held there also. In the first few years over a hundred children would go there for two week sessions of camping and crafts. They were taught Ukrainian singing and dancing, swimming and hiking.

We used to have services in the little church or we would have them in the open air, so services were for young and old. Many happy hours were spent there by all. Each family would bring a pot luck lunch and after the services everyone joined in for dinner, and all members helped in running the camp. Many donations were given and as a result, the camp is still in operation today.

In 1965 to 1966 the Elk Point church group sponsored the Alberta Crippled Children from Edmonton. In 1967 the members donated $100.00 to the building of the Elks Hall in Elk Point. That same year Rev. and Mrs. 0. Sorochuk started to teach Ukrainian reading, writing, and singing to all the people who were interested, in the old school by the town office. The church supported, and members took part in organizing a 30 - member male choir for the centennial celebration. The following years many bazaars, church suppers, home bake sales and raffles were held to maintain the church. We have many wonderful times to remember. We are not a very large congregation but are more than willing to help the church and one another. Our services are very traditional, colorful, and meaningful. At Easter time our church services are started on Good Friday to portray the death and burial of Christ, and then on Easter Sunday our food baskets are brought to the church to be blessed. The passing of the beautiful Easter eggs is an old tradition.