Card parties were popular in the winter time among neighbors or groups in the community. They were held at night as a rule and could be cribbage, whist, bridge, or 500 rummy. If you were a gambler, it might even be a poker game in a secretive den. Whist drives were usually held in the schoolhouse and would innlude everyone who could play cards. A prize was awarded to the highest scorer and a booby prize for the lowest. A small fee was charged each player to cover the cost of prizes and to put a bit of cash in the kitty. Lunch and coffee were always served.

Bridge sessions used to go on most of the night. There isn't such a creature as a lukewarm bridge fan.

Pots of coffee and refreshments would disappear at these home card party sessions. Over lunch, news was exchanged and much jovial banter took place. If you were a farmer, chore time always arrived too early the next morning, yet folks were cheered and the better for the fellowship shared with friends.

Toys were mostly of the home-made variety. Rag dolls were favorites, complete with a hand hewn wooden cradle. Spinning tops whittled from any empty spool fascinated youngsters, and jumping jacks on a string were fun. Whistles were made from green saplings. Even a piece of string provided for the 'cats cradle' trick and a length of rope kept kids skipping.

Marbles was a favorite game. Hop-scotch on the first bare patch of ground in the spring until ball season, was enjoyed by boys and girls. This was the time for stilts as well. It was a challenge to find out who could walk on the tallest pair. School children played tag, anti-aye-over, prisoner's base, hide and seek. Everyone participated at recesses and noon hour. Lunches were gulped so as to get busy at play. Playground equipment was scanty. Sometimes there might be a swing or a teeter totter and the ground would be worn and dusty from the heavy traffic of busy feet.

Christmas concerts were held in every school and were the highlight of the winter season. Tobogganing parties were common and much fun. Ball, both fast and soft ball, were the main summer sports. Many Sundays were spent at Whitney Lake swimming and feasting. 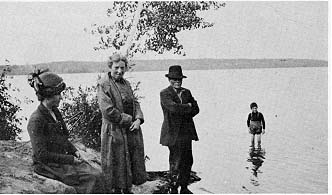 The first radio transmitter in Elk Point was owned an operated by Billie Wolfe. During the first World War, Billie would receive news from overseas and relay it from his set. In 1921, a radio broadcast with W. Wolfe as announcer was made. Listeners from as far away as Wainwright heard the program. It consisted of Violet Richardson (nee Ramsbottom playing piano, accompanied by her husband playing violin, a solo by Charlie Keller, "Let me Call you Sweetheart". Del Beebe sang and yodelled.

Playing horseshoe was a favorite pastime for many yea among menfolks. Every farm yard had a set of pegs and least two pair of horseshoes. Here, after work and particularly on Sunday, hours were spent pitching that game of hors' shoe. It was a game of skill to be able to throw one ringer after another. Many players could do this; competition was keen.

The first regulation horseshoes in Elk Point were obtained by taking up a collection of twenty-five cents a piece, to pay for a set costing $4.50 ordered by Dave Nelson of Beaver Lumber; The one playing area was located between Jacobson's Jewelery Store (now Bill Bartling's residence) an the Markstad garage (now Zarowny's Garage). Horse shoe tournaments were held at picnics and sports days. A few horseshoe players are still around and no doubt can pitch mean game. 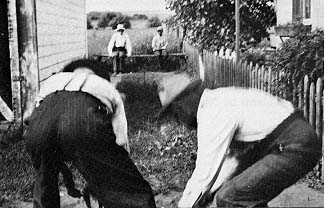 by an Early Pioneer

In the early days, due to Prohibition, settlers were unable to quench their thirst legally, so "stills" were dotted around the country, usually in inaccessible and well-hidden spots. Here the alcoholic beverage known as "moonshine" was made.

The "still" must be located near a creek, or where fresh cold water was available. The brew was set in wooden barrels -usually 30 gallons. It consisted of wheat, water, forty to fifty pounds of sugar, raisins and yeast cakes. This was allowed to "work" for five or six days. Then three rocks were chosen, and an eight-gallon cream can was placed on them. The can was filled with the brew, a wooden cover was made for it, with a hole drilled through it in which a copper tube was placed. One end went into the mash, the other end was coiled and passed through a pail of cold water and out into a jug. A fire was built under the can. The mash was heated, steam rose up the tube, and condensed as it passed through the pail of cold water, dripping into the jug. This was known as "moonshine" and was a highly potent drink. It sold for $3.00 a gallon.