Harry Prusak's business first originated as a mill which was purchased from Kost Pawlyk in 1940. Harry moved from a farm in the Waskatenau area and as he had blacksmith equipment he also opened a small shop and operated the two businesses until his health failed and he was forced to sell the mill. The mill was dismantled and the blacksmith shop was expanded to make room for larger blacksmith equipment which was purchased and the equipment changed to be operated by electric motors rather than gasoline engines. In the early days when there were a lot of wagons and buggies operated by h9rses, and the work was mainly repairing wheels, Harry had his daughters put on all the bolts and screws.

Prusak's Blacksmith Shop, 1945, where Sid Male's buggy is being repaired after a runaway.

Harry has now operated his business for thirty-eight years in Elk Point and is one of the few that have maintained the same business for this period of time. Although he is now semi-retired, he still opens his shop each summer to meet the farmers' needs, and as a hobby as this is something he really enjoys.

In 1967 Steve Shmyr and family moved to Elk Point from Fairview, Alberta. Steve worked for Buck's Construction as a welder and then for Elk Point Sales and Service as welder and partsman. In 1972 he purchased the old Beaver Lumber storage building and remodeled part of it into a welding shop, and the rest for storage. Since then he has kept very busy doing all types of portable welding and fabrication. Some of the articles made have been numerous front-end bale loaders, fifth wheel trailers, wrought iron railings, and many other things.

In 1978 the Beaver Lumber storage building (welding shop) lot was purchased by the Treasury Branch. The building is being torn down to make way for the new bank Plans are being formulated by Steve to build a new welding shop in the near future, in the town of Elk Point, in which to continue his thriving business. 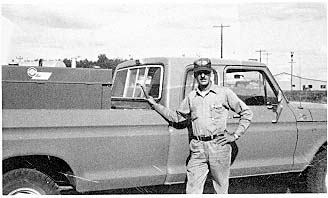 The Shmyrs have two daughters, born in 1967 and 1972. Mrs. Shmyr has been employed in the Elk Point Municipal Hospital since 1967 as a registered nurse. The Shmyr family are proud to be residents of Elk Point and to be able to contribute to the growth of this fine town