We all need to eat but sometimes have little time to cook. Elk Point's eating needs have been filled for many years by many restaurants.

Sam Lee ran the cafe at the old town site. The building was moved to the new location, but was not used as a restaurant.

A cafe was operated in the Caskey Hotel all through its duration, with "Ma" Caskey serving meals as usual while building was being moved down the street to its new site.

After the building was sold, it was used as a restaurant. The first owner was a Mr. Martin, and it is recalled the put a sign up on the door, "Women wearing halters and shorts will not be served." Walter Zarowny owned the building next, followed by Joe Wong. While Joe Wong operated the cafe, it was a favorite spot for teen-agers to gather after school to drink pop and play the juke-box. The building was bought by (Mrs.) Jean Slywka in 1967. She ran the business for several years, but the cafe, at this writing is closed.

Another early restaurant was started in a building on Main Street bought from Ray Keitges. It was taken over by Mah, about 1934. 'Tis said that many a romance was started in Joe Mah's Cafe, as the booths were secluded by high partitions. During the war years, help became scarce, and meat difficult to obtain, so the cafe was turned into a confectionery 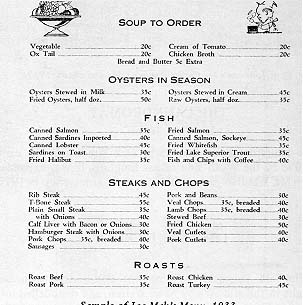 In 1943 Kost Pawlyk put up a building on the site of Ole Jacobson's Watch Repair Shop. This building, after being rented to the Dominion Bank for a short while, was made into a cafe that was operated by Kost and his wife Mary for many years. It was sold to Joe Uchman in 1966, and is now known as Stella's Cafe.

In the spring of 1976 Roland and Jean Gascon, previously twenty-five year residents of Prince George, B.C., purchased the only snack bar type business in the Elk Point area. Community-minded people, the Gascons brought with them a wealth of public relations experience and this is now reflected in the wellrun business they operate.

In the peak operating periods, the burger bar employs five full-time Elk Point residents and caters to a wide clientele. Everybody from tourists to truck drivers to local residents to the outlying native population have tasted the delectable foods the drive-in has to offer.

The menu consists of foods available at all burger-bar type operations, from the dairy products to chicken and hamburgers The friendly, courteous staff opens the business at 8 30 a m most mornings and closing hours vary.

The Gascons and staff are planning an early opening this spring and wish to thank all for past patronage and hope to see all of you in the months to come.

I have enjoyed my work in the cafe working with the public. I tried very hard to the best of my ability to please everyone. The growing town of Elk Point needs the cafe, but due to my ill health the cafe had to be sold in December 1977, to Fred and Mary Kryvenchuk. At the time of writing the cafe is closed for renovation. 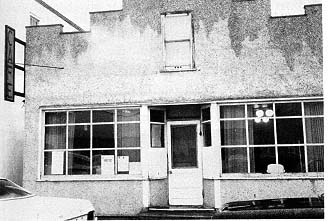