The fall of 1973 found a group of Elk Point boys looking for a way to expend their excess energies. Finding that basketball was a common interest, they set about forming a team that would put Elk Point on the map (well, at least on C. K. S. A. Sport's World). A lot of effort went into contacting accessible, interested competitors, capable referees and obtaining time in the school gym for practice and games.

The original line-up looked something like the Ukrainian Connection, reading: Jim RYLANCE No.5; Dave SHANKOWSKI No.12; Gordon MILLER No.13; Ron PIOTROWSKI No.21; Ray DANYLUK No.33: Randy KULCZYCKI No.44; Mal LANDRY No.55. 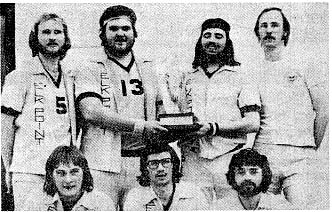 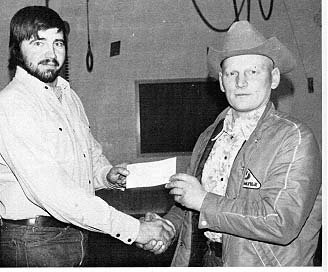 Gold and purple were chosen as the team colours. Each player purchased a uniform bearing the ensignia of the Elk Point Pacers.

In the initial year, games were played against men's teams from Grande Centre, Cold Lake, Vermilion and Mannville. The competition was stiff and the scoresheet was not always~a good indication of the drive, desire and determination of the team.

The Pacers hosted an invitational ten-team tournament in the spring of 1974. After two days of keen competition, the Lloydminster Sleepy Bears claimed the winner's trophy. This tournament became an annual event with every year a witness to great improvement in the quality of the sport. Each year this tournament draws players and fans from all over North Eastern Alberta, providing a boost to Elk Point's service businesses. Unfortunately, basketball does not appear to stimulate much interest in the local residents as the Pacer games rarely attract more than a handful of spectators. However, several local businesses have donated towards trophies and tournament expenses. A special thanks goes to Jim Young who has been a consistent contributor.

The Pacers represented the St. Paul County at the North Eastern Alberta Winter Games in Lloydminster in 1974. They did exceptionally well, considering a lack of bench strength with only six players, one of those with a sprained ankle. On the second day of the Games, the Elk Point team won four straight games but lost the fifth which would have won them a bronze medal.

In the 1974-75 season, the team joined the Lakeland Major Men's Basketball League, which consisted of teams from Mannville, Vermilion Town and Vermilion College. The Pacers swept the League winning all their games. They savoured the sweet taste of victory at the Vermilion Invitational Tournament by winning the final game against Lloydminster by two points. Again, as county representatives, the Elk Point team went to the Winter Games in Grand Centre but were unable to merit a medal.

By the third season, the Lakeland League had expanded to include two Lloydminster teams, Provost and Mannville. The addition of these teams greatly improved the quality of play. The Elk Point team matured, balanced and thrived, stimulated by good competition and aided by the addition of some good play players. They won all their League games except one against the Lloydminster Sleepy Bears. This year, in home territory at the Winter Games, the Pacers won the bronze medal in an emotional, action-packed game.

The 1976-77 season was anti-climatic, with no major or minor victories. Basketball was omitted from the Winter Games roster this year.

By 1977-78, the Lakeland League had only four teams: Lloydminster, Marwayne, Vermilion and Elk Point. In regular league play, the team did not fare exceptionally well; however, basketball was reinstated in the Winter Games and the boys brought home a silver medal from Fort McMurray. Again, this medal was earned in a hard-fought battle against the now notorious Lloydminster Sleepy Bears, who won the gold medal in overtime.

Throughout the five seasons of play, the team has seen many members. Of the original players, four are still active-Ray Danyluk, Gordon Miller, Ron Piotrowski and Dave Shankowski.

Other locals that have worn the gold and purple have been John Cabaj, Mo Hamdon, Chris Merrick and Nigel Whittington. The Pacers have also attracted players from St. Paul, Edmonton and Ashmont who wanted a chance to play on this unique team. They were Roger Hall, Bernie Hughes, Randy Rasmusson, Terry and Dan Rawe, Nestor Romanchuk, Gerald Samboe and Adrian Zazula.

In addition to the four originals who still play, present members of the team include Leigh Babcock, John Hutton, Ralph Howard, Todd Reed and Philip and Jerry Shankowski.