Reviewing the activities of the Elks Lodge No.460 during the past year, shows a steady round of activities has been the usual thing. At times the work involved within the workings of the organization borders on the monotonous, and yet the members are for the most part dedicated to the task of helping to make life in the community better, and giving service to the people. Their fine hall is the centre of most social events. The complete facilities make it practical for meetings, parties, dances, weddings, banquets and gatherings of all sorts.

The title of "Benevolent and Protective" is well founded, as is proven by the assistance provided to the three families who suffered the loss of homes by fire. Fifty dollars each was awarded. A student award of $25.00 was made. Edmonton Telerama received $100.00. Donation to minor hockey amounted to $867.00, and to Elks Bantam Hockey team, new sweaters, sox, and crests donated at $345.00. A contribution of $225.00 was given towards the cost of the rubber tile for the floor of the arena waiting room. A trophy was given to the 4H Club, and the annual Elks Christmas party for the school children was a theatre party, during which time they consumed $112.00 worth of popcorn. 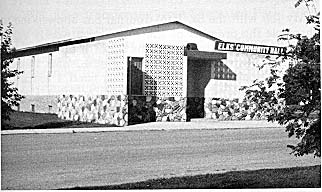 Plans are on the way for expansion of the facilities at the hall. It is hoped to enlarge the hall, and hopefully add a Lodge Club Room. 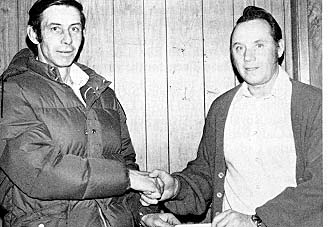 for new flooring in the dressing rooms and washrooms, and part of the lobby of the A.G. Ross Arena