From about 1929 to 1931 Alberta schools had school fairs, usually held between August 25 and October 9. Elk Point School and neighboring schools took part. The school fairs were conducted as a cooperative enterprise between government agencies and committees of local people. The government agencies concerned with the fairs were the provincial Schools of Agriculture, the agricultural representatives, the school inspectors and the Department of Education.

Seeds were distributed to the children of a selected group of schools. The children planted these seeds, cared for their gardens during the summer and in the autumn exhibited the products at a fair in a central point, which in this area was Elk Point.

In addition to those for garden, classes were open for livestock and poultry, grains, cooking, sewing, manual training, exhibits of school work, music and public speaking, school fair parades, and sports.

The exhibits had to be in place before 10a.m. of the day set for the fair. When the judges began their work, there was to be no interruption thereafter.

An important item on the school fair program was the school fair parade. Each room would choose a theme to their liking, then costumes and a banner were made, which were suitable to the theme chosen. At the beginning of the festivities, the various schools would enter the parade and march up the street past the two-room school. Each school received points. First prize had a value of nine points, second prize was eight points, and all other prizes ran correspondingly, down to a value of one point. When the total number of points by each school was determined, the number would be divided by the enrolment of the school on the date of the school fair.

A scholarship course was offered for one boy and one girl from each school fair. The selection of the winner was based on the maximum number of points won at the fair. I am proud to report that one Elk Point student, Frank Millar, won a scholarship short course held at Vermilion School of Agriculture during the second week in July.

There was keen competition between the schools, especially between Elk Point and Capitol, where (Mrs.) L. Edwards was a very capable and enterprising teacher. 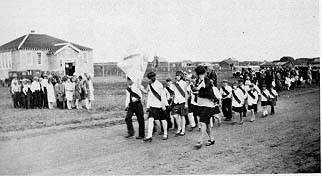 Elk Point school children parading at the School Fair about 1929. 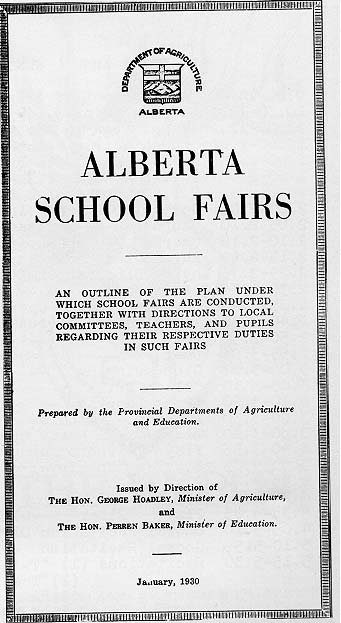 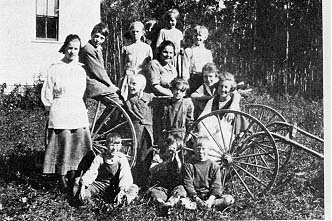 Paramount School, taught by Esther Markstad. Note the mode of transportation used in the 1920s.