At this point in time, it is impossible to visualize ear!y road conditions. To give our readers some insight, I am printing a letter written by August Bartling for the Historical Society as it was published in the September 1, 1976 issue of the St. Paul Journal:

Some time back L.W. Sumpton did some research into the reason that the road allowance from three miles west of Elk Point town, to two miles east of Elk Point town is not on the government survey line. The government survey east and west ran a half mile south. This road mentioned above was bought by the federal government in 1908 or 1909. It was rumored that the early homesteader received three dollars an acre for thirty -three feet wide and one hundred and sixty rods long.

In March, 1912, when we moved to Elk Point, the lake started at the Oscar Holthe farm two miles east of Elk Point to the high ground west of the stock yard. At that time the lake was two miles and a half long. The water in spring runoff ran out the east part of the lake and on down through the O.J. Fish homestead and on to the Spring Park Lake. In the way the road ran to Elk Point, you cut north west from the old J.C. Lambright homestead, that would be one mile south on the west side of highway 41. The trail kept north-west on high ground and circled back east about where the Elk Point hospital stands.

In 1914 the federal government gave a grant of $1500.00 to hand-dig a canal one mile and a quarter south of Elk Point running west three quarter miles. The pay was $1.00 for a ten-hour day; and you kept that shovel going because there was always someone around to take over. It took a month or a bit longer to hand dig the canal. When finished they went back to the lake and dug east to the water. When the water started to come it did not take long to start washing a canal out into the lake. By freeze-up in late September, most of the lake had gone. The old lake bottom was very soft; you could run a stick down a dozen feet and still hit nothing but soft mush.

The federal government then gave a further grant in the fall of 1914 to put in a corduroy road. It was log and pole, any kind of wood but it had to be twenty feet long. The homesteader got $1.00 an oxload for the poles. They started about where the old creamery stands (now the meat processing plant), piled it just like you would if you were getting your own pile of firewood for the wood sawyers outfit. The pile from the old creamery north was about three feet high all the way to about two hundred feet north of the railroad track. This was done after it froze up, and snow for the sleighs.

Come 1915, I worked on the hauling of earth with dump wagons. The four-horse fresno had come into being about that time -- it was about five feet wide, a big steel eye bolt fastened to the center of the fresno on both sides and a heavy steel bail fastened to the eye bolt that the horses pulled on. It also let the fresno pivot the front part up or down. The way you loaded it was with what they called the Johnson bar. It was fastened on the back part near the top about four to five feet long. A man walked behind and held the bar with both hands. This was hard work. If you wanted to dig deeper you lifted up the bar and the fresno's nose would cut deeper. When full you just pushed down hard on the bar and the fresno would come out and slide along by itself unless it hit a stump or rock, then it would trip over and you would lose a load.

The way they loaded the dump wagons was - first they dug a tunnel wide enough and deep enough for a team and wagon. 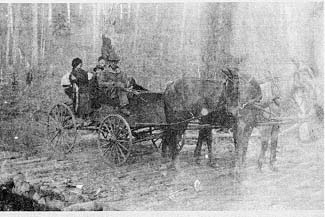 Then on top they laid a heavy log cover with a three by four foot opening in the centre. The wagon would drive under this and the four horses and fresno would go on top. The two middle horses would straddle the hole. A man stood there, grabbed the bar and dumped the earth and it fell through the hole down into the dump wagon. What didn't dump, the man used a shovel and kept it free of earth around the hole.

The reason they used dump wagons was the horses couldn't walk on the three foot high pile of logs and poles so the dump wagon could pull along side close and a lot of earth would fall down between the logs on its own. The men there would keep shovelling the dirt over that didn't fall. Another reason for the wagons was you could take a yard and a half of earth on the wagon where the fresno could only take a half yard and much would be lost because we were at last hauling the earth a quarter or near half mile. They did finish the north part with fresnoes, as we were getting short of earth from the south.

When they built highway 41, just on the south side of the railroad, west side of the highway, a big cat got bogged down and it took two cats to haul it out. The track of the stuck cat picked an old log down four or more feet and brought it up. The men couldn't think how it got down so deep. The end had the ax cut, and after being put there late in 1914 or early 1915 it was still quite hard. It sure did give quite a loud bang when it broke off. I told them about the logs and poles that had gone into the half mile to hold up the grade. They said for once the federal government did something that they got more than full value for the money. If you didn't have such a good foundation under this grade you never could keep it from heaving up and down by the frost in winter and spring.

After reading this account, one can appreciate the resourcefulness, the perseverance and dogged determination of these pioneers to overcome a problem. Moreover, it was a job, and money was scarce. No one would think of balking at hard work for at that period there was still a measure of dignity in the most menial task. Hats off to these hardy pioneers!

Vegreville was the nearest town for the first settlers - C.D. Smith and Caskeys. Then the railroad arrived in Vermilion in 1908 and Elk Point people traded there, going a distance of about fifty miles since the nearest ferry was at Hopkins, three miles up the river from the present bridge. An article in a December 8, 1909 issue of the Vermilion Standard illustrated the trip of one Elk Point pioneer. Mr. Tom Aarbo was in town for a load of supplies. One of his horses played out, so he had to return without his load to get a fresh horse. He arrived again on December 7 and finally pulled out for home on December 8 making a total of 160 miles travelled. In a May 19, 1909 issue of the Standard, we hear of another endurance test. "A bridge was built over Dog Rump Creek by settlers. This has always been a dangerous place and a bridge is badly needed. A week ago, Roy Caskey, while crossing the creek, had his team and wagon swept downstream and only by the help of settlers succeeded in saving the team. The wagon was badly damaged." An August 17, 1910 issue of the Standard reads, under Moose Ranch news; "In a few days a ferry on the town line, which will give us a straight trail to Vermilion, will be in. Just what we need instead of going five or six miles in a round about way to get there." We learn that this ferry wasn't installed until 1913. June 16, 1915 -Vermilion Standard, "Hopkins ferry cut loose and ferry boat swept down river and lost."

The railroad reached St. Paul in 1920. The settlers in the Elk Point area then had only half as long a trip. There was always much for pioneers to hope for; the railroad and bridge were yet to come to Elk Point. 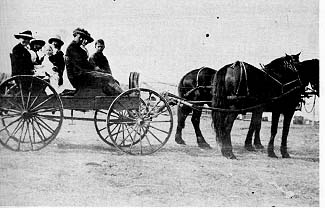 Ready for a ride in Fishes' new democrat. 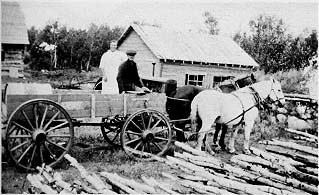 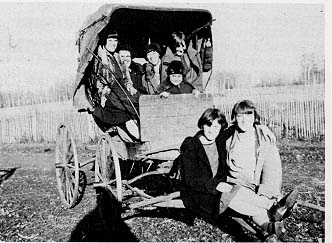 The Taylor buggy that carried the mail from Spring Park P.O. to Ferguson Flats. 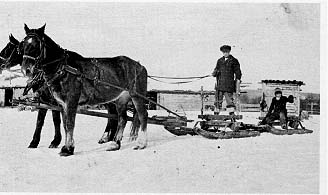 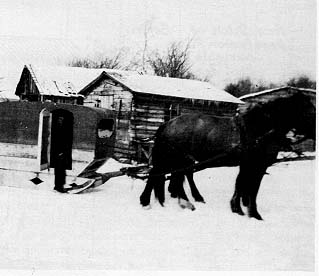 Winter transportation for the Kepke family.