THE HISTORY OF THE ELK POINT SCHOOL

From 1907 to 1910 many settlers filed on homesteads and started farming in the Elk Point vicinity. Some of these early settlers who had families were O.J. Fish, C.D. Smith, C.J. Markstad, Tom Aarbo, Jim Babcock, Frank Pinder,. C.M. Magnusson, Frank Lambright, 0. Jacobson, and P. Keitges.

One of the first concerns of these settlers was to establish a school so that their children could obtain an education. Mr. C.M. Magnusson, as senior trustee, and Mr. O.J. Fish, as treasurer, proceeded to secure the necessary information from the Department of Education to start a school.

The school site came under discussion and some thought the school should be built on wheels or skids so that it could be moved around the district at various periods to suit those who could be too far from school. A site was finally selected as a permanent location on the south east corner of S.E.-5-57-6-W4. Approval for this site was given on April 21, 1910, and on April 22, 1910, authorization was given the Board of Trustees of the Elk Point S.D. No.2005 to borrow the sum of $1000 for the purpose of purchasing the site, and erecting and finishing a school house.

The lumber for the school was purchased in Edmonton, where a raft was made of the required lumber. Other supplies necessary were placed on the raft, which was floated down the Saskatchewan River to a spot south of the designated school site. The raft was then taken apart, lumber and supplies were hauled to the site, and the Elk Point School was built.

School, however, did not commence until the next spring. During that fall and winter, the Elk Point Literary Society held its meetings in the new school house. The people of the community gathered there for business meetings or social gatherings. The school board, I believe, consisted of Mr. Tom Aarbo, chairman, Mr. 0.J. Fish, treasurer, and Mr. C.J. Markstad, the third trustee.

The following spring of 1911 school was opened with Mrs. Charles Hood as the first teacher. The school terms were short as winter set in early and often the trails were so blown in with snow that travel was impossible. After Mrs. Hood Mr. H. Ramsbottom, a resident teacher, taught for three successive terms. Some of the following teachers who taught for a short time were university students who taught during the summer months to help pay for their next term's tuition: 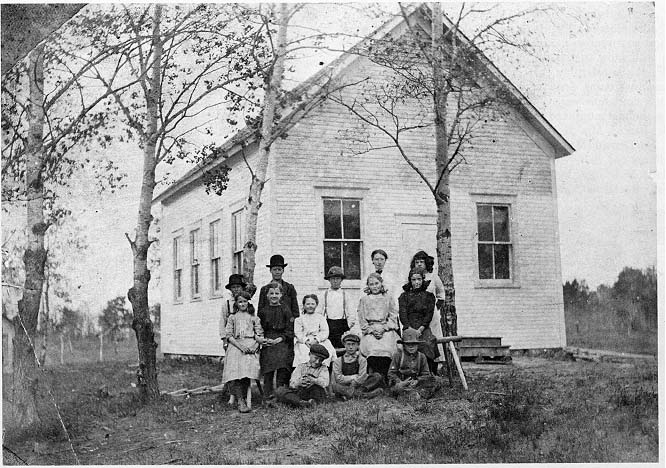 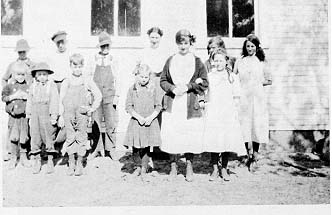 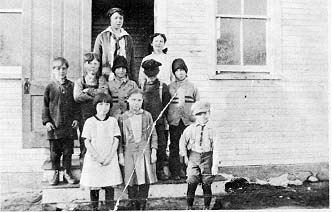 Since the pupil population was increasing, the trustees and ratepayers began to arrange for a larger school to house the students. 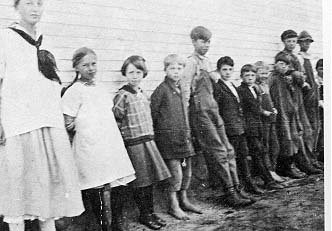 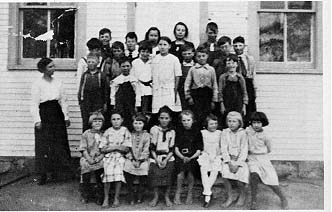 On June 28, 1928, approval previously given on April 21, 1910, was cancelled in favor of a site selected in Elk Point, comprising three acres on the south-east corner of N.E. -1-57-7-W4. Permission to borrow the sum of $8,500 for the purpose of purchasing the site, building and equipping a two-room school was given on October 9, 1928. This two-room school much later became town office and the police barracks and now it is being used as a court house.

The Elk Point School was ready for occupancy by January 1, 1929. The school district was enlarged to take in an area west and north of Elk Point. Miss K. Fenton, teaching grades 1 to 5, and Mrs. L. Sumpton, teaching grades 6 to 10, were the first teachers in the new two-room school. In 1929 the original school was brought to Elk Point. In September, 1930, it was opened for grades 9 to 11 and Mrs. H. McQuillan joined the staff for one year to teach grades 1 to 4.

In 1931 there was a great surplus of teachers and married women teachers were asked not to teach unless it was absolutely necessary. Mr. James Munn, Miss K. Fenton and Miss Alberta Pinder taught from September, 1931, to June, 1932.

Mr. J. Jensen came to teach grades 9 to 11 in September, 1932. Others on the staff were Miss A. Pinder, Miss V. Miller and Miss F. White. As the student population grew a second room was added to the old Elk Point School and (Mrs.) Della Jensen joined the staff to help teach the high school grades, now including grade 12. Other teachers who taught with Mr. Jensen as principal were Miss Syson, Miss Evelyn Johnson, Miss Muriel Caldwell, Miss Muriel Paulson, Miss Alberta Pinder and Mrs. L. Sumpton, who returned to teaching. Mr. Jensen joined the armed services and Mr. Russell finished his term for the first half of 1941

In the fall of 1941 Mr. R. E. Beattie accepted the position as principal and remained in that capacity as the school grew, joined the St. Paul School Division No.45 and, lat St. Paul County No.19. Mr. Beattie remained as the princ4 from 1941 to June, 1967, when he retired from teaching.

In 1941 Mr. J.V. Jacobson joined the Elk Point staff teach grades 7 to 9 in a new one-room insulbrick school situated between the two-room junior school and the old F Point school with its additional room. 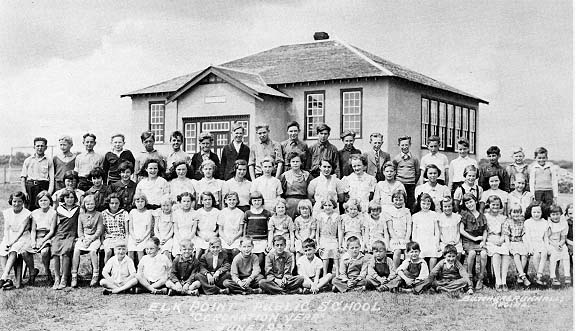 A three-room school was built on the location applied for and grades 7 to 12 were moved to the new high school in September, 1949. The Elk Point bridge across the Saskatchewan River was opened in June, 1950. This made it p05sible for the students across the river to come by bus to Elk Point School in their own division. They had been attending Derwent School in the Two Hills Division.

With the influx of so many students, the St. Paul School Division found it necessary to build an additional three rooms, plus a gymnasium, onto the existing three-room high school. As the other country schools around Elk Point joined the St. Paul School Division, these students also came by bus to Elk Point School. Soon all the classrooms became overcrowded and, as a consequence, country schools from various districts were moved in to be used for extra classrooms. The Canadian Legion Hall was even needed for a classroom. 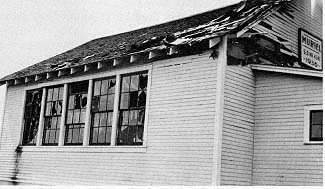 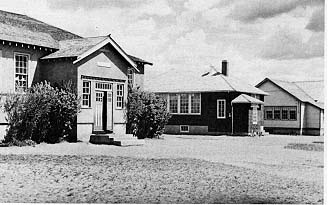 The contract was let and the new school, which so many had longed for, became a reality. At Easter, 1957, students in grades 1 to 6 were moved from the various old buildings into this beautiful elementary school, with (Mrs.) Florence McDonell as first vice-principal. This building contained a home economics room to be used by the higher grades. It contained also a beautiful gymnasium. Two country schools previously used for classrooms were now placed together to become the first Industrial Arts Building. (Mrs.) Margaret Michaud was the first home economics teacher and Mr. Dan Stetsko the first industrial arts teacher.

Some time during 1956 and 1957 St. Paul and Two Hills Divisions exchanged areas at the extremities of their divisions so that students living at either extremity would not have so far to travel. A number of high school students previously attending Derwent School now came by bus to Elk Point. This caused overcrowding in the high and junior high school grades.

On August 22, 1960, approval of a site for a new high school in the Elk Point district was granted, said site located on Lot E, Plan No.584 M.C., directly across the street from the new elementary school.

At Easter, 1961, grades 9 to 12 moved into the new high school, named F.G. Miller High School in honor of Dr. F.G. Miller, who had spent so many years on the board and who always had such a keen interest in the welfare of the Elk Point students. The old high school housed the junior high school grades, with Mr. K. Lazicki as vice-principal.

In response to a resolution from the St. Paul School Division No.45 that the Municipal District of St. Paul No.86 be formed into a county, approval was given by an Order-

The clerical work of the schools increased to such an extent that a secretary was employed, at first part time, and then full time. (Mrs.) Margaret Modin was the first secretary, who began her duties in 1964. She is still employed as secretary for the high school, and (Mrs.) Marlene Kryvenchuk is secretary for the elementary school.

The war had a serious effect on the teacher situation. When the war commenced, many left their classrooms to serve in the armed forces or to work in war industries. In addition, many hundreds of young men and women who, under normal conditions, would have entered the teaching profession, undertook some form of war service. After 1939, teachers' salaries rose and standards were relaxed so that classrooms would not be closed. Many teachers were called back to work and some were given "Letters of Authority" to allow them to teach during those critical times.