The modern square dancing craze crept up from U.S.A. A caller from U.S. Arne Crononburger held a few beginner dances at Vermilion which were radio broadcast. It caught fire. Vermilion, Mannville and Vegreville were square dancing in the early 50's. Callers emerged. Among them were Henry Lein from Lougheed, Harold Shocker from Bawif, Art Zeigler of Vegreville, Alex Schumeister of St. Paul, John Maxwell from Vermilion and later Walter Parker of Dewberry. The Elk Point Promenader Club started in the late fall of 1955 with 8-10 squares (which is approximately 64-80 people) taking lessons in the Legion Hall which has now been incorporated into the present Pioneer Circle Drop in Center. This class had to learn to dance on an 8' square section per set. John and Cora Maxwell were instructing. After one evening lesson a week for six weeks, a diploma was received as well as a red and white badge. The first executive was comprised of Dr. K.C. Miller president, Margaret MacGinnis, and a lunch committee. After Christmas a second set of lessons was given to another group of 8-10 squares. The Legion Hall was too small and the dancers moved to the high school gym (now the jr. high school gym). Dances were also held in Zarowny's garage. Admission charged for dances was 75 cents and lunch was free. Outside callers were invited to come to Elk Point in the spring. 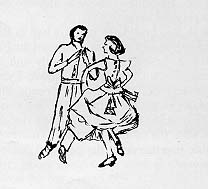 The second year of square dancing began again in the fall with more lessons and more dancers. To begin with, the crowd consisted mainly of adults, but later square dancing became popular with the teenage group. In 1957, crowds of from 15-20 squares were common at Heinsburg, Lindbergh and Frog Lake. John and Cora Maxwell instructed the dances in the areas listed above. Other districts receiving lessons were Riverton and Greenlawn. (They danced to records.)

Callers were paid a flat rate of ~20 an evening plus mileage. Square dancers visited other clubs and if you drove over a hundred miles you'd receive a Knothead badge. If you kidnapped the caller's wife, you could buy a Kidnapper's badge.

Birthday dances with birthday cakes and contests, door prizes, comic dances, grand proms, Christmas dances, exchange of gifts and treats were added attractions. If you visited other clubs and really loved dancing, one could dance up to five evenings a week at Bonnyville, Cold Lake, Islay, Kitscoty, St. Paul or Clandonald. Interest began to lag in 1960 with introduction of television and curling. There are still a few avid square dancers left, namely Don and Martha Lorenson who attend the Annual Square Dance Jamboree held in Penticton, B.C. 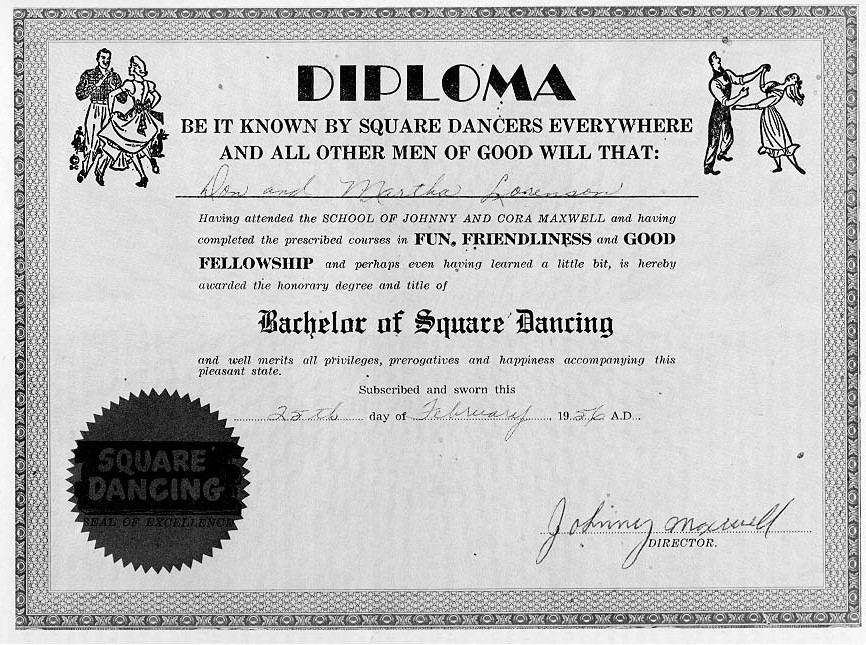