ELK POINT â A lasting tribute to the memory of a pioneer doctor in Elk Point from 1922 - 1968 was dedicated before a crowd of nearly five hundred people, Wednesday, February 27, when the year old Agricultural Society arena was christened "A.G. Ross Agri-centre".

Mrs. Ivy Ross, now residing in Leduc, was guest of honor, and with the Honourable Bob Dowling, Alberta Minister of Tourism and Industry, cut the ribbon to formally open the centre. Mrs. Ross expressed her gratitude for the honor bestowed on herself, her family, and the memory of her late husband, and wished for the people of Elk Point a number of years of pleasure from the agri-centre to equal the years of service Dr. Ross had devoted to the community. 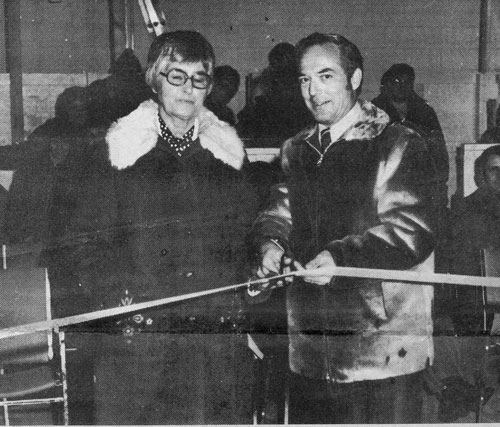 CUTTING RIBBON TO OPEN ELK POINT ARENA â Mrs. Ivy Ross and Hon. Bob Dowling, combined to cut the ribbon which marks the official opening of the Elk Point arena. It was named in the memory of her husband, Dr. Ross. 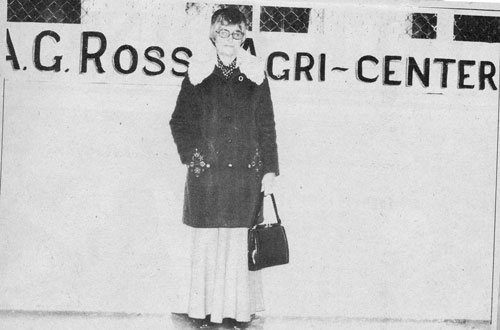 She paid tribute to the many people who had labored to make the centre a reality,  justifying the faith Dr. Ross had had in them and the future of Elk Point and district.

Master of Ceremonies duties were performed with his usual aplomb by Sid Holthe, Principal of F.C. Miller High School.

Following a chicken supper in the arena waiting room from six to seven p.m. the program got off to a colorful start with the Elk Point. Band and Majorettes, resplendent in new uniforms and caps, and bearing the flags of the Canadian provinces, smartly performing "O Canada".

In his introductory remarks, Mr. Holthe outlined the brief history of the building. The idea was conceived a few years ago by a number of people. some of them very young. The Recreation Hoard, aware of the need and optimistic about a favorable outcome, secured in turn a three-man committee to investigate further. A second committee initiated introductory procedures and an Arena Board of eleven volunteers was formed in 1970. Under their leadership construction commenced in 1971, but in the fall the Arena Board was dissolved and an Agricultural Society formed and the structure classified as a multipurpose project, thus qualifying for assistance from the Alberta government. Federal funding was also obtained in the form of an L.I.P. grant. The ice area was first utilized in December, 1972.

Congratulations were expressed by all guest speakers to the individuals, organizations, communities, the provincial and federal government to everyone who joined in the common purpose and devoted time, energy and money to the planning and construction of an imposing and enduring structure, valued at $160,000.

No one is ready to relax or lesser the momentum, for continuing support is vital. $35,000 is still owing, and annual maintenance will be ever a factor. Yet the A.G. Ross Agri-centro is felt by all to be a vote of confidence to the continuation and expansion of the total community, and a very real expression of faith in the young people of Elk Point and neighboring centres.

To bear this out a large part of the evening's program was devoted to performance by the young. The Band and Majorettes presented two fine routines. The Mites and Torn Thumbs were in attendance at the ribbon-cutting ceremony, and each later played a ten-minute period of hockey, found highly entertaining by the congenial crowd.

Mrs. Marie Buck, President of the Figure Skating Club, presented each class, and announced the awards of each. It was evident that the fledgling club has accomplished wonders in two short seasons. Mr. Ray Hellquist was called upon to provide details relating to the organization and plans for Minor Hockey, and their successes in brief history. 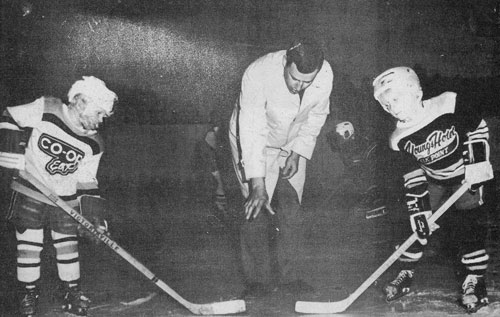 Mr. Blaine Easthope, President of the Agricultural Society, dropped the puck for the first face-off in the A.G. Ross Agri-centre. That specific puck will be retained, mounted on a backdrop, and kept as a memento.

No one in Elk Point needs reminding that the Senior Citizens are an important force in the community, and that their needs, too, will be met by the acquisition of the A.G. Ross Agri-centre. After all, it is they who voted overwhelmingly for the name. In recognition of their many contributions, and this one in particular, Mr. Easthope, on behalf of the Agricultural Society presented a cheque to Pioneer Circle P r e s i d e n t, Bill Bartling. to be used in some manner in their proposed Drop-in Centre.

An excellent hockey game topped off the evening's entertainment with the Elk Point Bucs winning a close one over the Saskatchewan River League "All-Stars". The friendly rivalry among the fans spurred the players to come up with one of the best games seen on Elk Point ice this season. 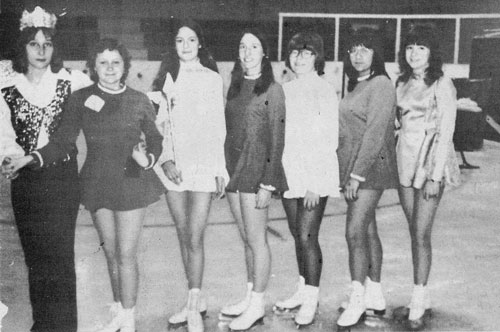