The most famous steamer was the Northcote owned by the Hudson's Bay Co. In 1877 the Northcote made six successful voyages upstream. Each trip was a distance of 940 miles from Grand Rapids, where the Saskatchewan flows into Lake Winnipeg, to Edmonton. In 1875, the Northcote made a voyage from Grand Rapids to Edmonton in eighteen days hauling 130 tons. A successful steam boat trip brought as much freight to Edmonton in a month as 200 or more carts could haul across the prairies in two months. The Northcote participated in the N.W. rebellion in 1885 by carrying troops and supplies. The ship could accommodate fifty passengers. Gabriel Dumont succeeded in damaging it by lowering a ferry cable that caught the smoke stack.

The duration of the sternwheelers on the Saskatchewan was short. There is mention in newspaper files in 1910 of a government survey yacht plying the river from Edmonton to Winnipeg. By the year 1889, navigation came to a halt.

Prospective homesteaders made rafts and floated a few provisions with them downstream when looking for land. 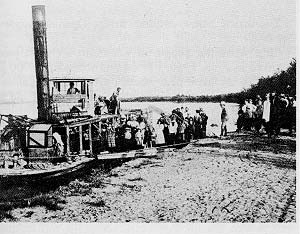 Steamer " The Minnow" plied between Edmonton and