In 1975 I started thinking about rental accommodation in Elk Point. One day, coming out of town, I noticed the lot by the creek. I though it was a lovely place to build a 4-plex. I found out it was open for tender so I put my bid in and it was accepted. I found a plan that appealed to me so in the spring of 1977 I formed the company. By June 1 started construction on the 4-plex. In August we completed two units which were quickly rented out to two schoolteachers. In early September the other two units were completed and were rented to two nurses. By the middle of September, landscaping and tree planting were completed. One month later I decided to build a house for sale for a winter project. It was completed in January of 1978 and later sold to Mr. and Mrs. Wm. Marcenuik. Presently I am thinking of another project. 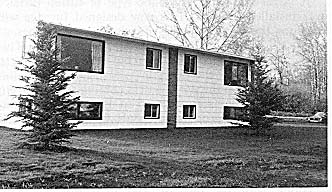