Enviable is the man who can say of his vocation after thirty-three years of service, "I'd do it over again, I've enjoyed it." These are the sentiments of Steve Andrishak, owner and operator of the one and only theatre in Elk Point.

The building, a hall then, was purchased from Eric Arnott in 1945. For the following five years it was used as a dance hall as well as a theatre. In 1950, renovations were made by sloping the floor and a sound proof cry room was provided for mothers with babies and small children. Two 35-millimeter projectors which are standard equipment replaced the two 16-millimeter projectors.

The Arrow Theatre has seating capacity for 280 people plus room for six more in the cry room. The early 50's were bonanza years for this theatre, until television kept folks at home. There would be a full house for every show that was shown at the theatre, a total of three different shows a week, shown Monday through to Saturday. It was necessary to display the full house sign even during week days, Steve remembers.

The censors were strict at this time and profane language was strictly forbidden. Many of the pictures shown were family entertainment. Western movies were popular. The calibre of shows has deteriorated sadly, and sex, sadism and violence are the order of the cinema. It is the opinion of Mr. Andrishak that movie goers are tired of this kind of film and will demand the return of wholesome, good family entertainment.

Television really hurt theatre attendance; crowds dropped to the point that had the Arrow not been a family enterprise, it would have folded. With Steve running the projectors and doing his own janitor work, and his wife Doris and sons John and Jimmy doing their stint in the ticket booth and concession area, they managed to coast through seasons that are not that lucrative. The six weeks past Christmas time, the hockey and curling season mean slow nights for the theatre. When these are over comes the time when the public are ready to return to the movies and good attendance can be counted on again.

Color was just coming in when Steve bought the theatre. Improvements have been sensational since. The admission rates at the Arrow are the lowest in the province. Current rates are:

During the thirty-three years that the Arrow Theatre has been in operation, many students have worked for Steve in the concession stand and as ushers. Among them are Evelyn and Elizabeth Soldan (now Didow). Evelyn worked for ten years. Jim Ramsbottom, Larry Ramsbottom, all four Prusak girls, Joe Tomkow and every member of Steve's family; Janice, Carol, Ellie, John and Jimmy have all worked at the theatre. Vern Raham, who later became a movie star known as Vern Grey also worked in the Arrow Theatre.

It is the earnest hope of the writer that Steve will continue his service to the town and community for many years to come. 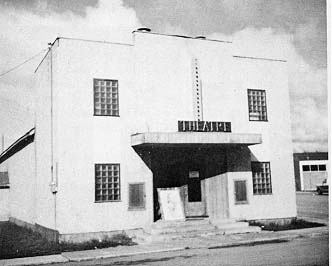 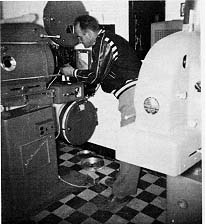 Steve Andrishak and his picture projecting equipment at the Arrow Theatre.