Land-Free Land! West of Winnipeg lay millions of empty prairie acres, one of the last great frontiers. The buffalo herds had vanished, their bones whitening beside the railway track pushing toward the Rocky Mountains. It was some of the world's most productive land and it was available to the homesteader for as little as a $10 filing for a quarter section.

It drew settlers by the thousands, from eastern United States, Great Britain, Scandinavia, northern central Europe. These brave men and women came lonesome land with little money, leaving their love ones back in their homeland, to brave the hazards of hail, the blizzards, prairie fires and mosquitoes, to start a new life.

"We got off the train and there we were on the platform at Vermilion, Alberta. Husband, wife and children in a strange land. 'Where ya from?' the station agent would ask. 'Wales,England, and we're looking for a homestead'." Some of our early homesteaders came first to Edmonton, built a scow, floated down the Saskatchewan River and landed nearest point to their homestead description using lumber from the scow to build a shack.

Locating your homestead sometimes was a problem. If a fire had gone through and burned the wooden stake, or somebody had pulled up the iron stake to use as stake for tethering their horses, you then were in trouble.

Prairie fires were always a threat to the early settlers, many were burned out and lost everything they owned. The last thing a man would do each night in spring and fall was to go outside and circle around his shack, looking to see if he could see a glow of a fire.

One homesteader had filed on a very rocky piece. When his neighbor came to visit him, he was out bumping over the rocks, swearing and sweating. As he was doing, he replied, "They should have shot the white man that crossed the Battle River with a plow.

The homestead regulations in 1905 permitted any male, eighteen years of age, or any widow to file on a quarter section of land for ten dollars. But they had to build a house and reside there for at least six months of the year for three years, and during this time they had to bring 30 acres under cultivation. This was known as "proving up" a homestead.

If you had a heavily wooded quarter, sometimes the cultivated acres were small and when the homestead inspector came to measure up the land, (after measuring the field next to the shack) he would ask to see the other field. This imaginary field was always in the north-east or west corner, half a mile away. Mosquitoes and blackflies would soon drive the inspector back to the shack, and he would give Instant approval without further investigation. In due time the settler would receive title to his land.

Homesteading in Alberta may be a thing of the past, not because there is no more land available for the settler's axe and plow, but because the province can't afford the amenities that homesteaders go after as soon as they get set up: roads, schools and other government services. That homesteaders have cost the government a lot of money is beyond argument.

By definition, a homesteader is an individual who doesn't have enough money to realize his dream of becoming a landowner. He pays for his land by working it, by winnowing a livelihood from unbroken, and in most cases, defiant land. That's the way a very considerable part of Alberta's agricultural land yielded to cultivation, and in the process an outstanding breed of citizens came into being. Not only may the old homesteaders take credit for what they became; they can take a share of credit, too, for what this province came to be. We hope our young generation will never experience the hardships and sacrifice that these hardy pioneers went through to bring them the high standard of living that they are now enjoying. 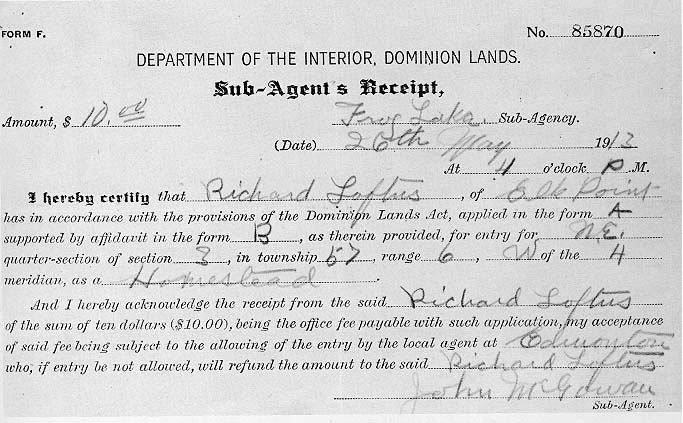 Homesteader's receipt for the ten dollar filing fee. Because of the Indian Agency at Frog Lake, a Dominion Government representative was nearly always there.

Steve Andrishak Coming of the Settlers