The fourth Annual Silver Buckle Rodeo is best related at this time through an article in the St. Paul Journal. The committee consisted of Steve Link, Clifford Swedgan and George Pinder.

The Fourth Annual Silver Buckle Rodeo, sponsored by the Elk Point and District Agricultural Society, got off to a fine start on the evening of Friday, June 10th.

R.C.M.P. Constable Brian Sparrow, in full dress uniform and bearing the Canadian flag led the mounted horsemen and horsewomen around the arena in a grand entry parade.

Following the playing of 0 Canada, Pioneer Circle President Mr. Dan Malachowski presented Elk Point resident Mr. Bill Bartling with a silver tray on behalf of the senior citizens' group. Mr. Bartling is the oldest citizen to have lived continuously in our community for the longest period of time.

Junior Wild Cow Milking for ages 18 years and under was won by Gary Suvak, Tim Holliday, and Don Hutton Jr. The trophy buckles for this event were donated by Elk Point Insurance and Realty. Brothers Kevin and Ted Hehr and teammate Bernie Poitras took second spot.

Scott Rowen won the Calf Riding event and the buckle trophy donated by Neil and Mary Nelson of Lindbergh. Also placing in the prize money were Dennis Dunlop of Bonnyville, Tal L'Heureux of Pierceland, and Wayne Bailey of Ashmont. Brenda McKay of St. Paul was a surprising contender in this event.

The Calf Roping Scramble was won by Marvin Ference followed by Michael Topylki and a young Makokis boy. Marvin won the McHugh Brothers trophy buckle for his efforts.

Open Barrel Racing was won by Murry Nielsen with the fine time of 15.8 seconds. Murry earned the Ken's Sales and Service buckle for his ride. Wanda Eliott of St. Lina took second spot and Janice Lawton of Ashmont third.

The All Around Cowboy trophy buckle donated by Paulichuk Farm Equipment was earned by Jim Bailey of Ashmont. The winner of this award is determined by standings in four senior events including Calf Roping and Timed Wild Cow Milking. Mr. Bailey was also the top money winner of the evening.

A Street Dance sponsored by the Elk Point 4-H Clubs provided a grand follow-up to the Rodeo. Despite the cool weather an excellent turn-out was reported. The cost of the musicians for the dance was absorbed by hotel owners, Jim and Duane Young, allowing the 4-H'ers a very profitable evening. 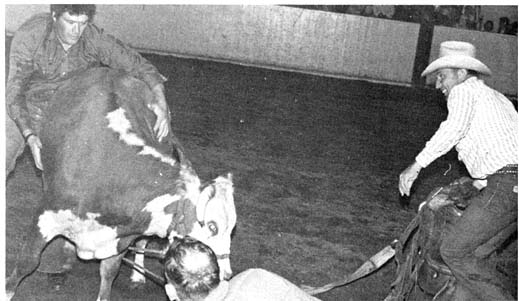 One way to stop a runaway horse is to bet on it.

The following is a resume of the Grand March as told by Constable D. B. Sparrow of the Elk Detachment.

Because I am a Royal Canadian Mounted Police ex-Musical Ride member, my fellow directors on the Elk Point Agriculture Society thought it would be colorful to have me lead the Grand March on horse back carrying the Canadian Flag in the '77 Rodeo. Bearing in mind that it might be hard to find a horse and tack similar to that which I had been used to, I accepted the challenge.

I finally narrowed the search for a horse down to Zipper, a brown standardbred, belonging to Clifford Swedgan. Mrs. A. Gregoraschuk supplied the Stubban saddle and the R.C.M.P. Stores in Edmonton supplied the double bridle, white head rope, and the shaberack. The Stony Lake Stampede Association supplied a pole with the Canadian Flag.

During the warm-up exercises in the arena about one half hour prior to the parade, there was a moment or two of excitement and tension. Zipper, for some reason, decided he'd prefer to be out in his pasture without this red coated Mountie and Canadian Flag on his back, so he decided to lighten the load. He reared in an attempt to dump the constable but unknown to him, the rider had some experience with these situations. Both of us got a rude awakening when we ended up on our backs on the arena floor. However, we all pulled ourselves together, brushed off and got on with the task at hand.

The parade proceeded uneventfully after this, with Zipper keeping a very watchful eye on the crowd and shaking in his shoes every time a flash bulb went off. 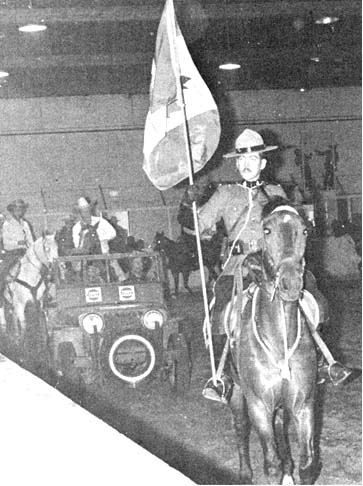