As early as 1926, petitions went in to the government requesting a bridge over the Saskatchewan River where the bridge now stands, but it wasn't until many petitions later and a great deal of work and promotion by the Elk Point Chamber of Commerce, spearheaded by Joe Jacobson, that it became a reality in 1950. This article appeared in a December 6, 1933 St. Paul Journal:

A rousing board of trade meeting was held here Tuesday evening with a good attendance of business men and others. The main objective of this meeting was to put before the legislative assembly the urgent and immediate need of a bridge across the North Saskatchewan River.

Elk Point has been a heavier loser this year than usual, all of the business south of the river being unable to cross the river for five straight weeks, and it may take two weeks more before it is safe to haul loads over the ice. Petitions are being circulated. 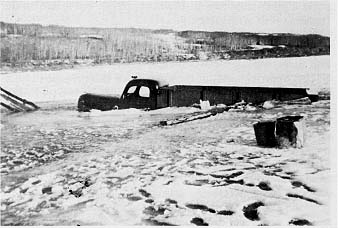 Paul Wasylishen's truck broke through with 100 bushels of wheat.

Truck sank to within one foot of cab top.

Brief presented by the Elk Point Chamber of Commerce to the Alberta Department of Public Works.

The Elk Point Chamber of Commerce comprises 51 members and represents influential citizens of the village and also approximately 2500 people of Elk Point and surrounding districts. It requests the building of a bridge across the Saskatchewan river, as near to Elk Point as engineers deem feasible.

Our district was founded in 1910, and is one of the oldest, yet one of the most isolated areas in northern Alberta. This isolation is largely due to our position north of the Saskatchewan river and to inadequate crossings on this river.

Several logical reasons come to our minds why this bridge should be built. In the first place, our rapidly growing town is one of the largest and most complete towns lying along the river. During the last 6 months, 33 lots of land were surveyed, and were sold for building purposes in less than 3 months. During that time 22 new business places and residences have been built, or are now under construction. In addition as soon as more building material is available, many others will be built. We have one of the finest municipal hospitals in northern Alberta. This hospital has a staff of 22 doctors, nurses, and assistants. It has a capacity of 50 patients. During 1944, the total number of patients cared for was 1571, of which 552 or about 36 per cent lived on the south side of the river. Since somewhat less than 215 of the hospital districts are south of the river, this shows how densely populated this area is, and shows, also, the very urgent need for a bridge. We have a large and modern creamery and other important business places, including general stores which often have a daily turnover of over $1,000 worth of goods.

We wish to point out that the actual ferry crossings are higher than at any other point along the river, and are becoming increasingly busier. It would be impossible to have a ferry of larger capacity, since the river would normally be too high for its operation.

As you undoubtedly know, the ferry was not in operation for several weeks this summer, and the people around Elk Point as well as tourists and travellers, are often delayed from six to nine weeks due to inadequate ferry service. This imposes a great handicap on the town of Elk Point and on the farmers south of the river.

We have two of the finest tourist attractions in Alberta. All we need to do is connect them, then many people will visit them. We refer to Wainwright and Cold Lake.

It is approximately forty miles from this proposed bridge to the nearest bridge at Duvernay. Also it is about 40 miles from here to the Saskatchewan border. We feel that this is the most logical point for a bridge to be built in order to serve the citizens of our province.

Signed on behalf of the Elk Point Chamber of Commerce, J.V. Jacobson, sec-treas. 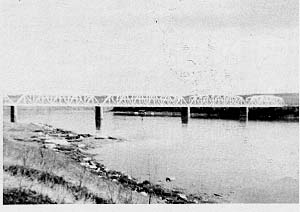 This new steel bridge replaces a ferry which has carried traffic across the North Saskatchewan River since 1913. The bridge will form a link in the new main highway system which will connect Vermilion to Elk Point, St. Paul and Cold Lake. Since the ferry was installed, the traffic has grown steadily from 12,000 in 1926 to 80,000 in 1947, and has increased at the rate of 20,000 cars and trucks each summer since 1947. The construction of the Lindbergh Salt Plant and the development of the country around Elk Point increased the ferry traffic till in the summer of 1949, its traffic count placed it first on the list of remaining ferries in Alberta.

Work on the new bridge started in October 1949, and two piers were constructed before Christmas. The month ofJanuary and well into February was extremely cold and work on the bridge practically came to a stop. However, with the return of more seasonable weather, the crew made exceptionally good time and managed to complete the concrete piers and erect the steel before the ice broke up at the end of April. The deck was completed and the bridge opened to traffic by May 25.

The substructure of the bridge, made up of four piers and two abutments, contains 2,000 yards of concrete. The foundations extend 8 feet below the stream bed to solid rock. The steel superstructure is made up of 1-250' main span with a 200' and 150' span on each side. These trusses contain 705 tons of steel and were erected in the record time of 28 days. The over-all length of the bridge is 960' with 22' clear width of roadway and 15' vertical clearance. It is designed for a high standard of loading will carry 2-20 Ton trucks abreast. The height of the bridge above the normal river level is 23 feet.

including deck plus painting and Misc.

The article below entitled 'Bridge Opening' appeared in The Beaver:

"But what the people of Elk Point are most proud of occurred in June, 1950. For on this occasion, 15,000 people flocked to the place near where Fort George had been built in 1792 and near the place where many of the old timers beached their river craft in pioneer days. For here was a modern miracle. --- a bridge. Here, at long last was a fulfillment of the dreams of the pioneers of almost half a century ago; here was the culmination of years of work by the people of the town and district. Yes, 15,000 people gathered to witness this wonder of wonders in the midst of what had been a wilderness. Those like Charlie Hood whose scow was beached near where the north approach is situated, or Alf Monkman who pushed the Elk Point mail across the soft ice ahead of him, as he cautiously felt his way over every inch, or C.J. Markstad, or C.A. Johnson, or any of the many others who for lack of space cannot be mentioned, ---- to every one of them the bridge becomes a lasting tribute, a symbol of theircourage in the face of difficulties back in the days when they followed the trails of the pioneers."

The change in transportation from horse drawn vehicles to motor cars was too rapid; the economic state of the province didn't warrant the spending of excessive amounts of money. There is no doubt that if the money had been available, better roads could have been built. When one considers that the Canadian Pacific railroad was built across Canada in a period of ten years back in the 1870's when Canada was scarcely four years old and with a sparse population of 3 1/2 million, and the fact that horses and men built it, then anything thereafter was possible.

North eastern Alberta was a neglected area in every respect, - poor roads, no railway for years and no bridge. The appeals of the multitude fell on deaf ears.