The first Elk Point Agricultural Society was organized in the year 1912, the following directors elected:

The first fair was held Wednesday, September 25, 1912, the Hon. P.W. Lessard slated to open the fair. 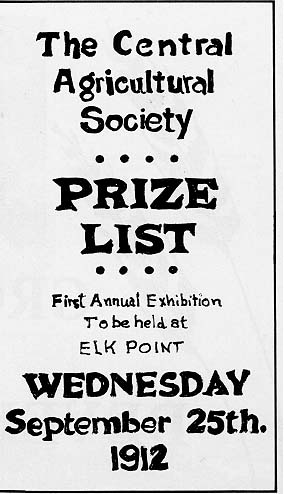 Wednesday, September 17, 1913-The second annual fair was a huge success, with a large exhibit of cattle, horses, swine and sheep. Also a large collection of fancy work.

1914- The third annual fair to be held this year will include horse racing, foot races and a ball tournament with $600 in prize money. The fair will be held this year on the northwest corner of 1/4 S.W.5-57-6 where a race track and ball diamond has been completed.

1915-The fourth annual fair will be held on September 17. Also Elk Point is celebrating this year on Dominion Day, July 1 and putting on a big and attractive programme consisting of a parade in the morning followed by horse races, foot races, football and baseball. The day will wind up with a dance in the new hall.

September 12, 1917-The sixth annual fair was held on Friday and Saturday of last week; the attendance was large and the exhibits were gratifying as was also that of dairy and home products and fancy work.

The second day of the fair was devoted to sports and horse racing. The baseball garne between Elk Point and St. Paul was the concluding feature of the day, it being won by the home team by a score of 12 to 7.

In the evening a dance was held in the hall which was well attended.

Owing to the pressure of war and flu, this was the last fair held for many years. Later, sports days and ball tournaments became the order of the days.

In 1971, the second Elk Point Agricultural Society was organized for the purpose of building an arena. It was completed in 1972 and the first fair was held September, 1974 and annual fairs have been held in 1975 and 1976. 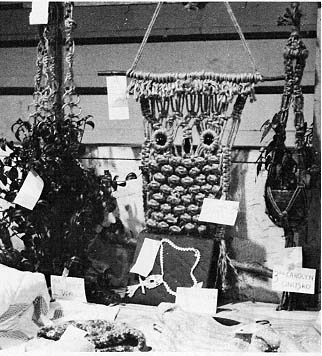