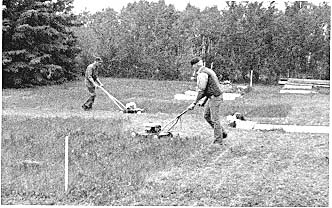 On June 16, 1977, several interested volunteers gathered at the cemetery with their lawnmowers, rakes, grass clippers, etc. for their annual clean-up day. Dick McGinnis brought his tractor and mounted mower to mow the east portion, saving many steps for those with the lawn-mowers. When all was tidy, we sat down to a pot-luck lunch and a short meeting followed. 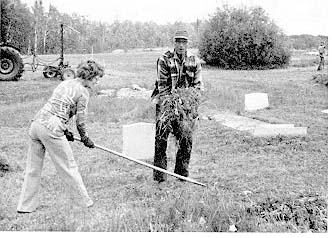 Three of our early pioneers were buried there this past year. Mr. Harold Smith died on March 6 at the age of seventy-three; (Mrs.) Elizabeth Day on April 20, at ninety-six years and (Mrs.) Nettie Flanders on October 24, at the age of eighty-two. (Mrs.) Patricia Bedard, eldest daughter of Mr. and Mrs. Clifton Magnusson passed away in Calgary on August 23, at the early age of forty-two and she was laid to rest here.