The Parent Nursery Group was formed in the fall of 1976 after a group of young mothers decided that they would enjoy one morning a week to socialize with other mothers and their children. Letters concerning the idea were sent into the community; a meeting was held and an executive was appointed to head the group.

After several investigations were conducted concerning a meeting place, the goup was offered a room in the former junior high school. They have since occupied it from September through to June, every Tuesday morning from 9:30 to 11:00 a.m. The next item the group had

to think about was finances and this problem was resolved in several ways-a fee of five ($5.00) dollars per family was and will be charged at the beginning of each year. Donations were received from Jim Young-$100.00; McHugh Brothers-$50.00 and several parents donated toys.

In the spring of 1977, a raffle was held and this brought in a good sum of money. Also in the spring of 1977, the Parent Nursery became a Preventive Social Services (P.S.S.) Project. With all the assistance obtained, several items required for a smooth operation have been purchased. These items were supplies such as paper, paint, crayons, etc., little tables and chairs, playpens, record player and records, bulletin board, educational toys, food and drink for lunch.

The first meeting was held on October 12, 1976 and has thereafter followed a basic pattern. For two weeks, two of the mothers prepare in advance two or three activities which could be painting, cutting, manipulating play dough or plasticene, colouring or pasting. The older children sit and do the activities while the younger ones play with the toys. They are all able to learn creativity and express their ideas through the playing and craft work. Language development takes place through their talking and listening. After the activities, everyone has a small lunch and then they are off to the gymnasium of unstructured play activity. Sometimes bean bags, a ball or boxes are provided and using these, motor coordination is developed. The children enjoy their time in the gymnasium and when time is up, they are ready to go home.

During the years of 1976-77 and 1977-78, several special events took place. For Halloween, paper masks were made by the children who paraded through the classrooms on Halloween day. A Christmas Party was held both years with Santa coming to visit and giving every child a gift. Each child received an orange and a candy cane to take home which they did after enjoying a lunch of sanwiches, etc. Another event which the children thoroughly enjoyed was a puppet show put on by two of the mothers. 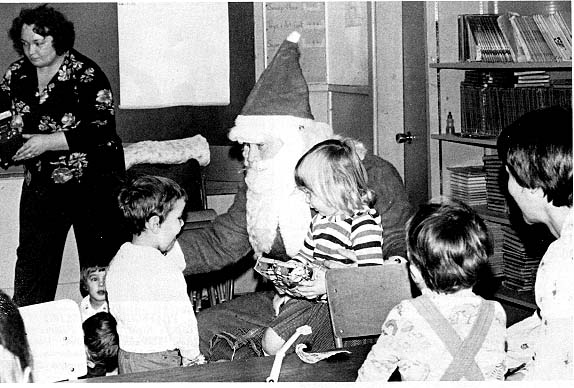 The Parent Nursery Group was not designed completely for the children. For the mothers, it provides a time to meet others and to share some of their ideas and problems. Lois Shelpawy, the health unit nurse kindly donated some of her time to present some informative films to the group. Some of the ideas covered were toilet training, child behaviour, stages of childhood and overprotection by the mother.

In May of 1977, a guest speaker by the name of John McKee from St. Paul, Alberta was invited to come and 'discuss children's art. His presentation was excellent and provided a lot of information about understanding children's art.

During the year 1976-77, approximately twenty-five (25) mothers and thirty-five (35) children were involved in the program and in the 1977-78 year, about the same number registered. Both the mothers and children enjoy the day and look forward to the next week.