THE SALT INDUSTRY IN THE ELK POINT DISTRICT

Western Canadian Oil Companies, namely Anglo-Canadian, Home Oil Co., and the Calgary Edmonton Corporation, were drilling in the Elk Point - Lindbergh district in search of oil and gas. A well was drilled near Lindbergh and gas and oil as well as salt were found to be present.

With the North Saskatchewan water, natural gas, and the railway close by, salt could be easily produced. This brought about the formation of the Alberta Salt Company. Backed by the three oil companies, construction was started in June, 1947. The plant went into production in July, 1948 with G.L. Williams as general manager and Mr. Bert Ayres as plant manager.

The salt bed lies 2600 feet below the surface and is extracted by double cased wells. Fresh water is pumped down the outer casing to the salt vein below and forms a brine, which, being heavier than water, sinks to the bottom of the cavity and is forced up the inner casing by the pressure of the fresh water coming down. Crystal salt is recovered by evaporating the water.

One hundred twenty-five tons of vacuum salt were produced daily by forty full time workers. Household, farm, and industrial salt was marketed under the brand name "Cascade". In 1951 the Alberta Salt Company was the first salt plant in the world to produce fused salt on a commercial basis.

A new company, the Canadian Salt Company was formed in March, 1951, to purchase the salt business of Canadian Industries Ltd., and the Alberta Salt Co. with head offices in Montreal. Mr. N.C. Hobson, formerly with the salt division of C.I.L. became president of the Canadian Salt Co. Mr. Bert Ayres was plant manager and Mr. John Williams was the assistant manager. From 1953 to 1956 Mr. H. Sills was plant manager. In 1956 Mr. Williams took over as manager, a position he still holds.

The history of the plant is one of continuing expansion. In 1952 the fuse plant tripled production and in 1955 produced six tons an hour. The new fuse plant was rebuilt in 1956. In 1963 the production capacity doubled to 250 tons a day. In 1966 the plant doubled in physical size. In 1970 two bulk storage sheds were built with a capacity of 5000 tons each. In 1971 the capacity of the power plant was increased by 50 percent. In 1972 a third evaporator was in-stalled to bring production up to 360 tons a day. In 1977 a new furnace is being installed in the fuse plant which will increase the fused salt produced to 200 tons a day.

The Canadian Salt Company now has 100 full time employees at the Lindbergh plant who live in Elk Point -Lindbergh district. 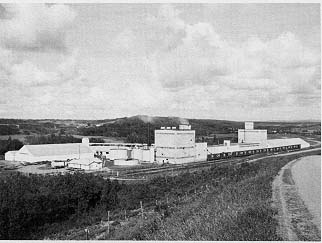