Our 'Guiding' report covers the time between September of 1976 and June of 1977. The parent's group, registered as the Elk Point Girl Guide Local Association (L. A.) formed the nucleus of Guiding in Elk Point. As in the past, they gave unending support, both financially and morally to the youth groups' leaders.

The executive was made up of Carol Metz, President; Carol Hellquist, Secretary-Treasurer; Peggy Smereka, Badge Secretary; Donna Fedorus, Girl Guide Phoning Committee; Donna Babcock, Brownie Phoning Committee; Sharon Kuhn, Publicity Chairman; and Donna Gulayec, Tea and Bake Sale Co-ordinator. All mothers gave generously of their time when asked to help. 1976-77 proved to be a busy time for the L. A.

The L. A. organized and conducted a joint registration night for Guides and Brownies in the elementary school gym on September 16. On October 12, the L. A. mothers organized and helped drive the Guides and Brownies around town to canvass for the blind. This canvass is usually carried out by the Elk Point United Church, but they had asked for our assistance this year, due to a lack of young people to do it.

The Woodsmoke Area Annual Leadership Training held in Elk Point the week-end of October 22/23 exemplified the tremendous L. A. and community support given to the Guiding movement in Elk Point. Over fifty Guiders from all points of the area-from Cold Lake to Provost, from Lloydminster to Andrew-registered. The Elk Point Elementary School was given free of charge for training sessions in the classrooms, and for sleeping accommodations (in sleeping bags) in the gym. The L. A. helped register the Guiders and served a buffet supper and evening coffee on Friday and Saturday.

The group was fed all its meals by the L. A. at the United Church Hall. These facilities were greatly appreciated. Donna Fedorus and Donna Babcock headed up the meal planning and organizing. The parents donated a large portion of the food, plus their time spent to cook and serve it. All the Area Guides raved about the tremendous hospitality shown.

The annual Tea and Bake Sale was held on February 19, 1977. The United Church donated their hall and kitchen facilities for this fund raising project, and the public supported it whole-heartedly.

Financial support was sent by your L. A. to help cover expenses of our Sak-a-guna District Commissioner Victoria Perry of Ft. Kent, to attend the forty-eighth Alberta Provincial Girl Guides of Canada Annual Meeting and Commissioners' Conference held in Lloydminster April 14 to 17, and hosted by the Woodsmoke Area.

When the Brownies decided to host a Revel for the four Brownie Packs in the Sak-a-guna District on April 30, the L.A. again donated money and mother-help to feed the 117 girls who attended. The Agricultural Society donated the use of the arena for the day and many local organizations and businesses contributed to defray the costs of the Revel. This unfailing support of the community will not be forgotten by the leaders. 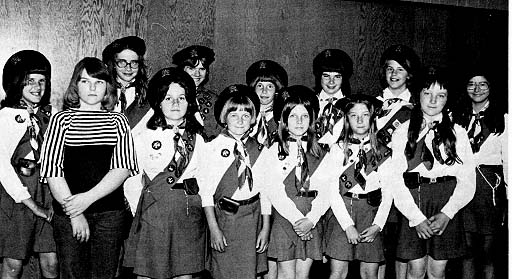 Each member in the Guiding movement in Elk Point was presented with a "Queen's Jubilee Badge" to commemorate Queen Elizabeth II's 25 year reign. The L.A. bore the cost of all these badges.