THE ORDER OF THE EASTERN STAR

The Order of the Eastern Star in Elk Point does not report their activities to the news media on a regular basis, nevertheless the Chapter has held well attended monthly meetings plus an extra June meeting for the official visit of the Worthy Grand Matron of Alberta,

Sister Isabelle Norrie. By special dispensation this June meeting was held in the Sanctuary of the United Church, which provided a beautiful setting for this very special meeting. 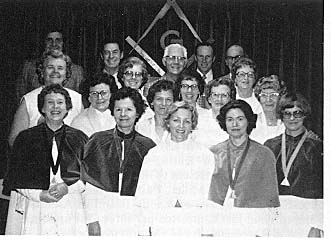 While Margaret Rose Chapter is not a service club, the members donate to worthy causes. The 0. E. Star supports homes at Lethbridge, Calgary, Edmonton and Grande Prairie for Eastern Star Senior Citizens. We also donate to the Worthy Grand Matron's project, which in 1977 was the Kidney Foundation.

Each month there is a committee to report if any of the members are in the hospital or sick at home. Flowers or plants are given to the sick members. Members visit the sick and take cards or send them.

Since April 1977 was the twentieth anniversary of Margret Rose Chapter, a special program was arranged for that meeting. Letters were mailed to all charter members. Anna May Slater of Edmonton (A life member of Margret Rose), Grace LaBoucane of St. Paul, Bernice and Nels Colter of Kaslo, B. C. are some charter members who were present to take part in the program. 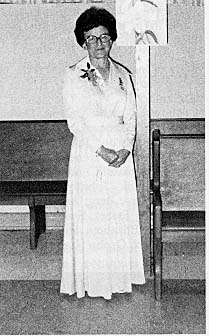 In early December the members of Margret Rose had a table at the Flea Market held in the Elk's Hall. This venture proved quite successful