Buck's Construction Co. Ltd. was incorporated in 1961 by a partnership between Paul and Edward Buck of Elk Point, for the purpose of gravel crushing and general hauling in the north eastern area of Alberta. The company initially commenced operations with a Caterpillar TD-9 overhead loader, a gravel truck and two employees. The company was bought outright in 1970 by Mr. E. E. Buck and has since then expanded to include a complete line of crushing equipment, plus a payroll of approximately twenty-five people who live in and around the Elk Point area. 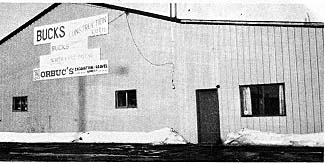 Buck's Construction was awarded and consequently carried out one of the largest crushing contracts in Alberta history in 1975, when the company crushed 485,000 tons of aggregate in the Kananaskis area, west of Calgary. The company has also crushed gravel for Great Canadian Oil Sands Ltd. and has also worked in the development of the new town of Fort McMurray. At the present moment, county, municipal and government projects form a large majority of the crushing carried out by Buck's Construction Co. Ltd. of Elk Point.

North East Paving Co. Ltd. commenced operations in the fall of 1974, as an offshoot of Buck's Construction Co. Ltd. with Mr. Edward Buck as president and Mr. George Snider as secretary-treasurer. Mr. Buck brought to North East Paving, a complete and detailed knowledge of the aggregate business. Mr. Snider had several years experience in the asphalt production business in Calgary as a division manager for Gallelli-Canfarge of Canada.

North East Paving is the only hot mix asphalt company situated in this area and has carried out several paving programs since its inception. The majority of these programs have been within a hundred mile radius of Elk Point and include:

The company payroll varies from six men during the winter months to approximately thirty men in the summer. Most of the men on staff reside in Elk Point or the surrounding area.

North East Paving has, at its disposal, a completely portable Pioneer 101 asphalt plant, Blaw Knox PF 180 paver, plus loaders, rollers and generators, all necessary for the complete production and installation of hot mix asphaltic concrete