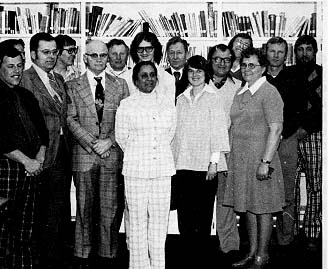 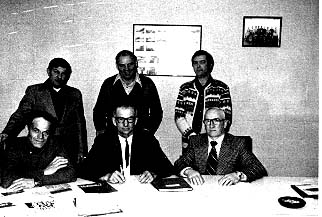 In February, the annual North East Teachers' Convention was held in Edmonton at the Plaza Hotel. The convention theme was "Return to the Basics". The guest speaker was Mr. Harry Wong, a dynamic classroom teacher from California.

May was highlighted by graduation in the high school and attendance at St. Paul Arts Festival for the junior high classes.

In June, 1977, the junior high began the transfer of books and equipment from the old junior high building to the high school. The last couple of days of junior high classes were held in the senior high school gymnasium. 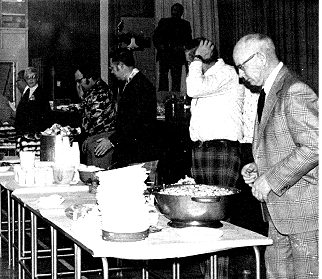 The new school year started on Monday, August 29, 1977 with the students coming in the morning for registration only, and the afternoon being devoted to teacher preparation and a staff meeting. The total enrollment was 282.

(Mrs) Margaret Modin is the secretary and (Mrs.) Rilla Higgins is the library clerk. Wednesday afternoon, August 31, Margaret Modin hosted a coffee party at her home for the ladies on staff and for staff wives and other invited guests to introduce the new comers to the old timers.

The evening of Friday, September 9, the elementary and high school staffs invaded the Matveyenko residence for a "Welcome Here" and house warming party. On Friday, October 21, the schools were closed so that teachers could attend the Professional Development Day at St. Paul. The theme was Children Concern Community. Father Lucien Larre was the keynote speaker. Very inspiring' On Tuesday, November 8 the students once again had a day off, as parents were invited to come to school to pick up their children's report cards and to meet their children's teachers. There was an excellent turn out. 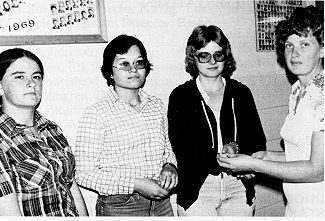 Volunteer Pins are presented to High School students for their volunteer work through the Work Fxperience Program.

Friday, November 25 was Awards Night. There was a good turn out of guests and most of the award winners were there.

The administration and Margaret treated the staff to some tasty Christmas goodies after the staff meeting December 14.

On Thursday, December 22 we had a combined elementary-high school staff Christmas party at the Elks Hall. Unfortunately there were furnace problems and it was rather chilly, but the meal was good and Santa Phil and his helper did an excellent job.

Friday, December 23 was the last day of school before the Christmas holidays. The staff hosted and served a Christmas dinner for the students and invited guests. Ron Onusko was the chairman for this event and everybody pitched in and helped. The staff appreciated the generous donations which made this dinner possible. It is hoped that it will become an annual event.

The following are some of the items recorded in the Minute Book:

January 14, 1977--The graduating class held a decorating meeting and selected the colors blue and white for this year's decorations. The back wall was to be a mural of a sunset with "Long Ago Tomorrow", the theme, written on it.

March 15, 1977--On March 15, the Senior Girls Basketball team is to play the OK Radio Sore Thumbs. Marie Chubey suggested the team go around to get sponsors,-so much for each point.

May 31, 1977 - (Mrs.) Ruth Vogel presented pins to Brenda Suvak, Diane Swedgan and Joanne Ference for volunteer work at the hospital through the school's Work Experience program.

Played in an interlocking league, losing only one game in ten.

The Senior Girls' Basketball team placed third in the province in the AA competitions. 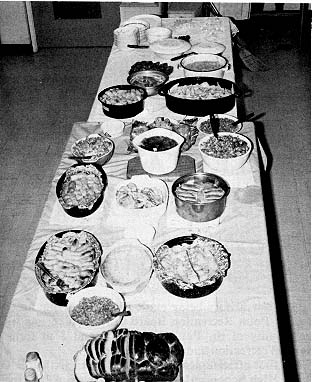 Showing the twelve traditional Ukrainian Christmas dishes at a dinner prepared by grades seven to nine.

The purpose of the meeting was to discuss and choose colors for the 1978 graduation. The majority was in favor of American Beauty and white.

The teachers and Mrs. Modin put on a Christmas dinner for all of the students from grades 7 to 12. Guests were the bus drivers, the superintendent, the mayor, and various other representatives from other groups. The meal was a great success