The hospital in 1923 consisted of a shop purchased from Mr. Mehlman and moved along side the doctor's residence. It was 16 x 24 feet, a storey and a half. An additional 10 x 16 feet was added to the front of the building. The ground floor had a room 12 x 12 feet used as an operating room and, at times, as an emergency ward. There were two long narrow rooms on the west side, just large enough to accommodate a hospital bed. An alley about 4 x 12 feet to the east of the operating room was used to hold a cot, when necessary. The examining office was in the south-east comer, about 10 x 10 feet. A stairway in the south-east corner of the original building led to the upstairs wards. These were two in number, a small one in the south-west corner, and a 12 x 16 feet room across the north side of the building.

Then there was a landing at the head of the stairs which always contained one, and some-times two, hospital cots. In summer, there was a 12 x 12 feet wall tent in the yard behind the building, which housed four cots. The overflow was accommodated in the living room of the doctor's residence, and, occasionally, in a downstairs bedroom there. On one occasion, when everything was crowded to capacity, a man with a broken clavicle had to sleep on hay in the loft. The place was heated by a home-made wood furnace in the cellar hole under the building. This ramshackle outfit operated as a hospital from the late I fall of 1923 until November, 1928.

During the first year of operation, thirty-five patients ( were treated in the hospital. Admissions increased each year, untill the last year a total of 435 were treated. The old register has been lost or destroyed, but average admissions would have been between 250 and 300 patients a year.

Most of the time the staff consisted of two graduate nurses and one undergrad, or ward aide. The housekeeping staff consisted of two girls working under Mrs. Miller's supervision. The R.N.'s received $75.00 a month, which was about $25.00 above the provincial average. The housekeeping staff got from $15.00 to $25.00 a month, according to skill and experience. Among the R.N.'s who worked there were Miss Bell, Miss Smithson, Miss Ruth Hewlett, Miss Rachel Haugen, Miss Fouracre, Miss Freeman and Miss Wiywitka from Lamont Training School, Miss Foster from the General, and, for the last two years, Miss Erna Hanna and Miss Nora Williams from the Royal Alex.

In 1925, the Mooswa Ladies Community Club donated blankets, sheets, towels and hot water bags for use in the hospital. The doctors were very grateful for these articles, as shown by Dr. Miller's letter of thanks.

On February 3, 1927, an X-ray machine costing $4000.00 was installed in the Elk Point Hospital. This was the only X-ray in North-eastern Alberta.

In the fall of 1927 a movement began to have a municipal hospital established under the provincial plan. The principle of the plan was to build by debenture and government grant. The hospital was to be supported by a taxation rate of 3c an acre. There was some opposition from those with large holdings and small families but, when the vote was taken, well e above the required two-thirds majority was obtained. There- xi fore, in 1928, Elk Point Municipal Hospital No.18 was built and officially opened November 26, 1928.

The equipment from the old hospital was installed in the V new and was gradually replaced as funds became available. Technically, the hospital was a fifteen-bed affair, but, by i putting six beds in the four-bed wards, three in the two-bed c wards, and five on the sun porch, where none was supposed U to be, it was possible to handle twenty-eight patients without overcrowding too much.

Miss Signe Holter was the first matron, with Miss Erna Hanna as assistant and operating room nurse. One of the ear'er nurses to join the staff was Miss Dorothy Ambrosy Buzzy), who, as Mrs. Pelechosky, served faithfully for many ears.

Elk Point Municipal Hospital, 1928, when it was very new. 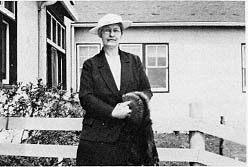 The first Hospital Board consisted of Herman Sand, Joe Cousins, George Shortridge, 0.J. Fish, Casper Zarowny and Alex Peterson. 0.J. Fish was the first chairman, followed by Herman Sand. Dr. F. G. Miller was the first secretary, with most of the work being done by Miss Mary Hanna. He was followed by William Wolfe, A. Ham, B. Haverstock and Walter Saranchuk, the latter from 1954 and still serving as administrator. Other chairmen of the Hospital Board were William Soldan, Eric Arnott, Joe Tredger and Tom Belsheim, present chairman.

The first janitor was Del Beebe, a farmer from a few miles ast of Elk Point. He fed cord after cord of wood to the fur-Lace to keep the place warm, year after year. The first cook was Patricia Diamond (Mrs. Edwin Â£ndgren). She became ill in 1930 and was replaced by Ida Valtz (Mrs. Martin Aarbo).

In 1938 a ten-bed addition was built on the old unit and, in 1952, a twenty-bed unit was added, giving the hospital its compliment of beds, services and appearance which remained until demolition in October, 1976.

In September, 1976, Elk Point had a totally new Municpal Hospital and patients, staff and equipment were trans-erred from the original structure to the new hospital complex. Today, an ultra-modern hospital, costing approximately $3,000,000, planned and programmed to suit the present and future needs of Elk Point and district, is ready to serve those who require its use. 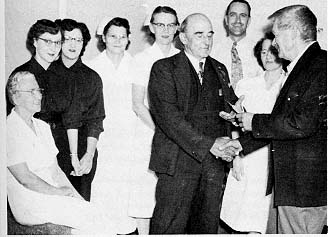 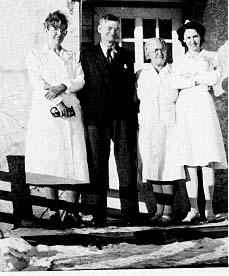