From the St. Paul Journal

Theresa Gadwa, a 51-year-old Cree Indian, has been elected chief of the Kehewin Reserve, 165 miles east of Edmonton. Mother of 13 children, the eldest 32 and the youngest 10, Mrs. Gadwa was elected over three male nominees. She received a vote count of 35 out of approximately 100 registered votes. She will be chief for a term of two years. There are about 510 people on the Kehewin Reserve.

In a telephone interview on the weekend, Chief Gadwa told The Journal being elected chief "doesn't change me. I don't feel any more special or mightier than any other persons on the reserve. I feel I'll be more humble. The people voted for me and I will continue to speak for them." 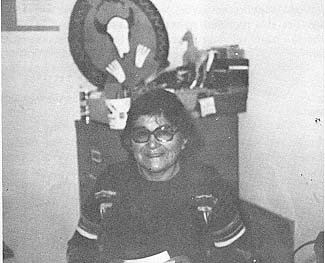 Chief Gadwa is the second woman to be elected a chief in Alberta and will be working with a council of five men.  (Mrs.) Lillian Pruden of Beaver Lake was the first woman chief to be elected to the post, about four years ago. "I'm sure they respect me and feel I'll do a good job on the reserve," said Chief Gadwa.

As chief, she hopes to improve conditions on the Kehewin reserve by increasing and expanding the reserve's cattle business and its weaving factory.  She noted it's "a working reserve" with very few welfare cases and a reserve that runs its own administration. Her husband, Henry Gadwa, is a cattle farmer on the reserve.

A major concern of hers is the education of native children. "If a native child doesn't have an education he won't be able to survive in white society." said Chief Gadwa. She said the day of trapping and fishing when parents didn't care if children went to school or not is "entirely out of the question." She said the Indian is becoming more involved with the outside world and "we're not afraid to go out of the reserves any more." Chief Gadwa has been involved with native education for a number of years. She was chairman of the Kehewin school committee for 12 years, sits on the Bonnyville school board, is a board member of the Blue Quills School board and is president of the school bus co-op on the reserve.

Baptised and raised as a Catholic, Chief Gadwa said "I came out as a good Catholic I hope," and is a regular churchgoer. She was born on the Saddle Lake Reserve and attended the Blue Quills School, three miles west of St. Paul up to Grade 8. She speaks Cree and English. She sees a definite revival of Indian spiritualism. "I don't see anything wrong with the worship of Manitoo." said Chief Gadwa. "It is like the worship of (the Christian) God." Although she does not attend Indian spiritual meetings, she said she feels it's a good thing because "it's time we got our culture back."