by Den Robertson and Rilla Higgins

1977 was a busy year for Preventive Social Services in Elk Point. After considerable homework was done and information compiled, the Elk Point Home Nursing Association was formed. It subsequently received its charter in March of 1977. Nurses located strategically throughout the area served by the Elk Point Municipal Hospital began dispensing home nursing care under the authorization and supervision of Elk Point Doctors K. C. Miller and E. D. Bauld. 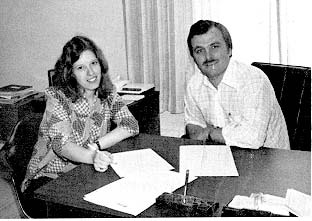 Pioneer Circle, with a membership of about 200, continued to be active. In addition to their own concerns, members extended their interests to the community as a whole. Workshops were held to assist members in ascertaining how the groups could best become a viable resource for all Elk Point residents.

Members also benefited from workshops conducted on the subject of growing old and what one can expect of his/her physical being in advanced years.

The Historical Society benefited greatly from Pioneer Circle's assistance in gaining funds for the society's publishing of local memoirs in Reflections-A History of Elk Point and District.

The Economic Development Committee extended invitations to businesses to locate in Elk Point. The Treasury Branch was approached and asked to consider Elk Point as a future site. The Vermilion Savings and Credit Union was also invited to our town and a committment obtained. The Credit Union announced that it would open an Elk Point branch sometime in the spring of 1978.

The committee also held discussions with the Department of Agriculture with regard to the committee changing its outlook to one of Community Self Study, the name the committee now holds. 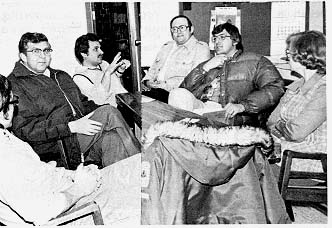 MEMBERS OF THE PSS ECONOMIC DEVELOPMENT

Exhibiting a great deal of determination and dedication to its cause, the Elk Point Nursing Home Group, under the auspices of P. S. S., conducted the necessary surveys as a prelude to submitting a brief to government stating local need for a nursing home facility in our community.

The local Teen Group was without a centre for some time due to a lack of money necessary for renovations. It finally opened its doors in the former RCMP barracks (presently the Court House) in the spring of 1977.

P.5.5. involvement in the Meals on Wheels program was ongoing. Pioneer Circle undertook the job of coordinating delivery of the meals. Despite the increase in the amount charged per meal, the same number was delivered each weekday. 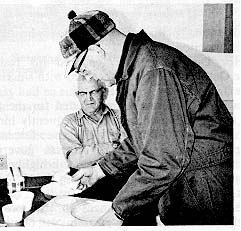 Board members undertook to expand volunteer services with plans to establish a Volunteer Bureau for widespread volunteer services in the community. Jeannine Boratynec, coordinator for Volunteer Services, began a volunteer driver program for transporting residents of Buckingham House to and from town once a week. Broader plans were quashed, however, by provincial inaction. 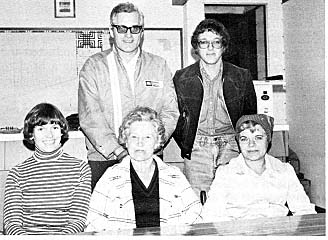 THE PREVENTIVE SOCIAL SERVICE BOARD 1977

Director Don Robertson tendered his resignation effective October 15. It was accepted with sincere regret by the board and town council.

Reviewing of applications submitted for the position led the board to interview and subsequently hire Anne Riley of Windsor, Ontario, effective December 1 Although a newcomer to the Alberta government's province-wide P.5.5. program, Anne is highly qualified for the job and is working closely with the local P.S. S. projects mentioned previously.

There were numerous changes in the local board during the year. Their three year terms up, chairman Dr. Elro Bauld and member Dr. David Didow left the board during the summer, Ken Bucyk, a junior high school teacher, and (Mrs.) Ann Kates, retired business woman, joined regular board members Vera Romanchuk, Bill Schuhmacher, Jeannine Boratynec and Rilla Higgins, Rilla was elected chairman.

Following the local election held in October, the board welcomed town council newcomer Bill Ballas as town representative to P.S. S. He took the place of former councillor Alphie Hurtubise.

"People helping people" continues to be the motto of Preventive Social Services as a whole and of the local board in Elk Point.