BEEKEEPING IN THE ELK POINT AREA

During the early days in this part of Alberta, beekeeping was carried on by farmers operating a few bee hives as a hobby and for their own supply of honey. With the rationing of sugar in the 1940's this hobby became more popular and several people would go together to buy a small hand-turned extractor and tank. Often the extracting was done in the kitchen and things could get pretty sticky during that busy day in August or September. Then the extractor would be taken to the neighbour whose turn it was to use it next.

With the large acreages of sweet clover and other legumes, and slower methods of haying, the bees had plentiful sources of nectar, and crops of 300 pounds of honey a hive were not uncommon. It seems that summers were longer and warmer in the 1930's and this would prolong the period of nectar gathering.

Bees were purchased from California in two or three pound packages, each containing one queen and about 8,000 workers. They came by rail to the local station each spring after the snow had melted. The agent was quite anxious, no doubt, to get them to their owners as quickly as possible because there often were a few bees riding along on the outside of the cages!

After World War II, fewer and larger apiaries became evident. Fred Shewchuk expanded his business into one hundred fifty hives and sold the crop from his general store. Before his death he interested Don Woytkiw in bees and sold him his last three hives. Don worked for a large beekeeper in California for two winters and in the following years has increased his business to four hundred hives. He has constructed the boxes and necessary frames almost totally by himself and hauls extra packages by truck each April to supply the other beekeepers in the district.

More recent arrivals to Elk Point are Roy Watson with sixty hives, Gary Lind with two hundred, and myself with seven hundred fifty.

I moved my outfit from southern Ontario in the spring of 1973 to avoid the encroachment of cash crops. The sowing of corn in our area had greatly reduced the amount of nectar bearing crop being grown. I chose Elk Point because this area had plenty of alfalfa and was not as crowded with commercial beekeepers as the Peace River block.

For an extracting plant I am using a former one-room school at the east end of town. Each summer during the busy season, I employ local students and try to get a least one experienced bee man to help harvest the crop before the cool weather arrives. Most of the honey is poured into forty-five gallon barrels and shipped by transport to large honey packers for further processing and packaging. Western Canadian honey is noted for its light colour and mild taste and a large amount of it is exported to the United States, Japan, and Europe.

The average crop has been one hundred and fifty pounds a hive and depends upon the amount of rainfall and the number of frost free days during the summer. I set out the hives in groups of twenty-five to thirty on farms throughout the area. It is essential that there be at least one acre of nectar bearing plants for each hive within a radius of two miles.

Bulk honey prices peaked in 1973 but have dropped steadily since then as more and more hives were brought into production. Operating costs, as in other types of agriculture, have continued to climb and present a real problem at this time.

Bears can destroy large amounts of honey and equipment if the hives are located too far from human habitation. During nightly visits, skunks scratch the ground in front of the hives and proceed to eat the bees who crawl out to investigate the noise. This activity reduces the hive population and can, as a result, also reduce the potential honey crop.

Agricultural experts state that the effects of pollination by bees are of greater commercial value than is the honey and wax produced. Seed clover, rape seed, raspberries, and strawberries are examples of crops in this area which can benefit from the bees. 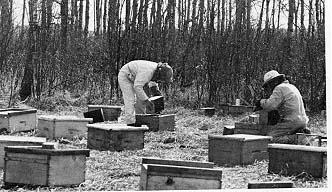