Kehewin was first established in the year 1876 when the treaties were first signed. The first Indian agent was Mr. G.G. Mann who was stationed in Onion Lake, Saskatchewan, serving six reserves. The first treaty paid out to the people was fifteen dollars for each head. The Chief or Okimaw was paid twenty-five dollars.

After the treaties were signed, life was not all the same for Indian people. Among the changes brought on by the treaties was that the Crees would have to submit to a form of segregation since they with other natives had sold our vast domain and could no longer roam as they would like. They were given to choose certain areas of land wherein to build their future homes. These would be known as "Iskonikana", reservations. These reserves measured according to the number of families forming a band or group and headed by a recognized leader or Okimaw.

At the outset these leaders were to hold office for life. Their title would be "Chief" and they would have a helper or councillor for every hundred people of a following. As had already been explained, the "Okimaw" of the old days was supreme leader of his band; he was respected and loved by his followers who did everything to make for him the life worthy of his calling.

The first Chief "Okimaw" of Kehewin was Chief Kehewin. He was chief till 1885 when the Royal Commissioner took away his chieftainship and his medal. So the Long Lakers were minus a chief for many years. The next chief was Chief J.B. John who was selected by the people of the Kehewin Reserve. He was the grandson of the old Okimaw Kehewin. He was selected in the year 1911. He resigned as chief after ten years due to his illness.

In the year 1916, March 22, the first Day School was opened by an 18 year old Indian youth, Mr. Joe F. Dion. The school was 18 by 16 ft. This school was in use till we had the new school built in the year 1952. Some of the reserve kids attended the Onion Lake Boarding School and some attended the Blue Quills Residential School. In the year 1953 our students were bused from the reserve to Bonnyville School to the integrated schools. In the year 1975 we opened a new school on the reserve. It is owned and run by the reserve people. We have from playschool, kindergarten to grade six. We had some graduates in the past years. Some have come back to work for their people. 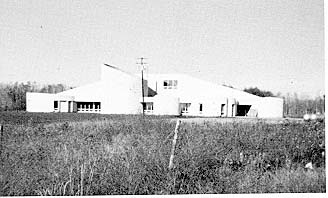 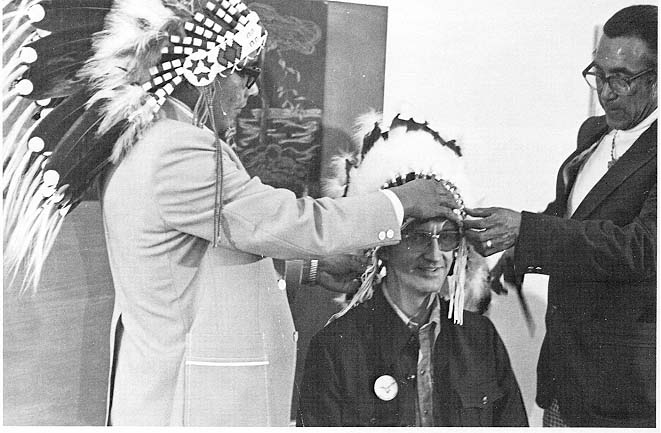 The reserve always had a field nurse or doctors come direct to the reserve. Their first medical doctor was Mr. J.R. Mathison and a nurse. In the year 1922 Miss Gerry was assigned to look after the school kids on the reserve. Today we have a clinic right in the school building. We have a registered nurse come every day who works on the reserve with a community health worker who had a lot of training. At the present time the Band elects their chief by a secret ballot. So are his council elected. They hold office for two years.

In the olden days men hewed logs and made houses and pretty near all the homes had built-in fire places but of course these homes had no flooring. Then men did logging and were able to make their own lumber and also made their own shingles. Then they changed their way of living.

In the year 1956 the first $8,000 home was built on the reserve. Then the next year, two more were built and so on for many years. Then came the $10,000 home with the furnaces and basements. Then in 1976 $45,0000homes were brought in for seven lucky families, with full basements, inside plumbing and furniture.

A person could obtain a house by applying for it and then if there are more than ten applications, the chief and council will select the names of the most needy families who are qualified to receive a home. These homes are bought through the C.M.H.C. Some families are renovating their homes through the C.M.H.C. loans.

In the olden days people also had their fun activities; they held dances, rain dances, chicken dances, pow-wows. This still goes on but today our kids are more involved in all kinds of activities. We also have a paid Recreation Director for our reserve. It has been said that Chief Kehewin was a very strong believer in God and his people were all Catholics. They did not believe in any strange or false Gods. They worshipped the Great Spirit alone. To this day our religion is going strong. 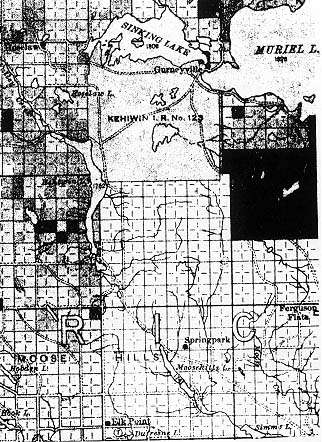 A map of Kehewin 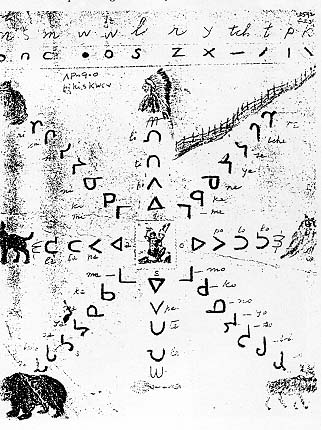 (The following is a translation)

l am writing to you a short note. These are buffalo. Our animals of days gone by. There are many kept here, where we are. A great many of them. A photograph was taken of them, that l am sending to you. And so Bear Hills (Hobbema Reserve) and from where we are, is 105 miles from a big city. We are two miles from a small town.

I have no news to tell you just now but we are all well Try and send me a letter. I want to hear some news. And so I send greetings to your son Pe-sew, and to you Uncle Ermineskin, Chief, I send you greetings, and to all our relatives.